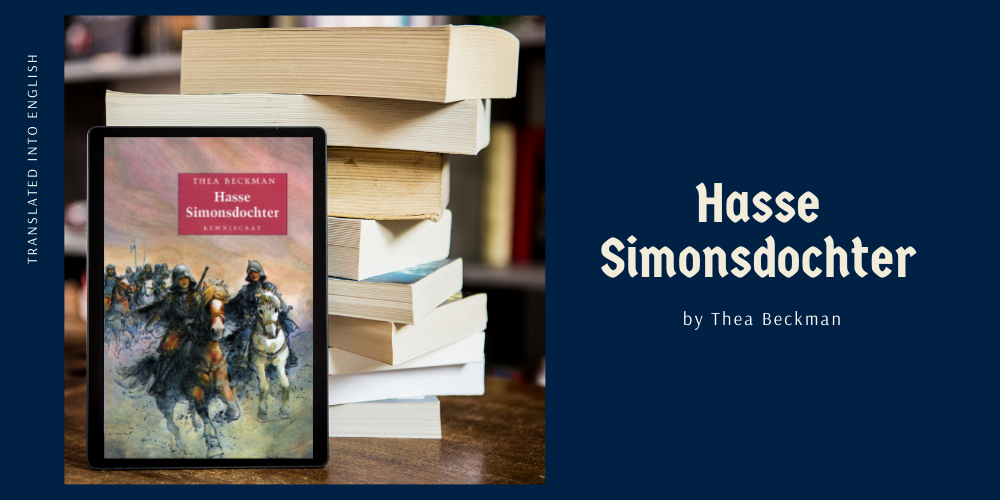 In order to practice my English and to introduce you to one of my favourite books: Hasse Simonsdochter (1983), by Thea Beckman. In this romanticised version of the story about Jan van Schaffelaar (c. 1445 – 1482), the Dutch cavalry officer saves Hasse Simonsdochter (the main character) when she is attacked by a couple of cattle-drivers who pass the Kampereiland. Van Schaffelaar is said to have killed one of the drovers and was sentenced to death by the people of Kampen. But then, something happens… 😉

This is the second part of this translation, click here to start at the beginning.

While her mother knelt down beside a pillar to pray in disappointment, Hasse walked around the colossal building in amazement. In awe, she looked up to the windows allowing light to enter in a hundred colours. When the organ began to play she listened, trembling with discomfort to the sounds that surrounded her. And then she discovered the painting. It represented the torture of Saint Sebastian. Hasse saw a naked writhing man tied to a pillar. He was pierced with arrows. The blood was running from him in rays, his face had left in agony, but that was not what captivated her.

She stood still, her thumb in her mouth, looking up at the horror and when her mother pulled her arm, snarling: ‘Where were you!’ Hasse took the thumb out of her mouth, pointed to the panel and said clearly:

But Hasse didn’t believe it. She let herself be drawn outside to the sunny square and there they were absorbed in the hustle and bustle of a metropolis. Kampen in the fifteenth century: that was a concept throughout the known world.

Little Hasse had difficulty absorbing everything she saw. It was too much at once. A church as big and high as heaven. Streets and alleys, full of people, beautifully dressed, who spoke to each other in stately fashion and sometimes just entered stone houses. High heavy gates, chariots pulled by horses where the wagon man walked beside them, shouting that the passers-by had to step aside. An impressive town hall with the shovel tower, next to which the iron cage hung; in it, criminals were exhibited. The Fish Market at the Fish Gate where the stench hit you on the throat.

And then all those warehouses, where goods were brought in or carried out, and the dozens of ships along the IJsselkade, decorated with flags, pennants, rolled up sails. Next to the famous bridge over the IJssel stood the tollbooth, also built entirely of stone, and next to it the most wondrous structure of all: a crane with a wheel bigger than that of a watermill, in which men were walking. They walked and walked, pushed with their bare feet on the spokes of the wheel and still did not move forward, but the wheel turned and wound up the winch with which heavy loads were lifted out of the ships.

Hasse stood there looking at it long and carefully until her mother grabbed her by the arm and dragged her along. The child kicked, screamed and braced, but it became willing again when it noticed that they would now cross that bridge again, above the sparkling water, where Hasse could see how the ships sailed across the IJssel with all sails flowing. Once again she looked back and saw the city with its impressive gates, thick walls, circles and towers, and behind them the treetops. So beautiful, so colourful!

She actually wanted to return immediately, but once on the other side of the river, when they passed the village of IJsselmuiden and walked over the Oude Zeedijk, she met the hissing silence of the polder and could see the Nieuwe Zeedijk in the distance, behind the meadows of the Geute. With all her six years she knew it again: there are the reed lands where I am not allowed to come, but where the birds live, where the reeds live and where it sings so wonderfully in the summer.

She forgot the city with all the noise and bustle and waved exuberantly to the cows on the city meadow. ‘Stop that,’ said Mother strictly, ‘they are not giants, they are cattle’. She thought it was absurd for a human child to greet a cow. Yet one of the cows answered the greeting with a deep mooing, and little Hasse laughed. She answered! ‘Oh, Holy Mary,’ sighed Mother, ‘what did I deserve that they sent me their pixie brood on the roof? And she pinched Hasse so forcefully that the child screamed. Coming home to the hut that was built against the dike, Hasse got a beating; she screamed high up, but no reedling came in indignantly to claim her…

Later on, when she got a bit older, Hasse came to town as well. Then she had to help her father bring baskets, reed mats and chair seats to the market because even though she was a girl, she was big and strong for her age. Once inside the walls, Hasse, wild and disobedient as she was, usually managed to escape quickly to run through alleys and streets and watch the building of the new wall. Not so long ago, the city council had decided to build a new wall, further west, because Kampen had grown so fast that many citizens had to build a house outside the walls, and they were not safe there. The sea skimmers from Kuinre did not mind sailing up the Reeve and plundering the suburbs of Kampen.

It is true that at the beginning of the century the people of Kampen had smoked most of the nests of predators in the area, expelled the predatory knights and razed their castles to the ground, but Kuinre was too far away, too well hidden. A punitive expedition once undertaken by the Kamper skippers against the robber’s nest had done little. That is why the town had to be expanded so that every inhabitant of Kuinre could do his or her job in complete safety within the walls, trade and sell his or her wares to the market.

The new wall progressed steadily but was not yet completely finished. Workers with wheelbarrows and building materials hid the alleys. The Burgel, once the western city canal, had now become an inland waterway but was nevertheless full of ships bringing in bricks and mortar. Seeing those walls rise up so high, so thick and strong, while the masons crawled over the scaffolds was a fascinating but incomprehensible sight for Hasse. What possessed those gatekeepers to shut themselves off from the wide, wide horizon? To prevent the wind from blowing through the streets and blowing away the stench of the dung heaps?

Little Hasse was jealous of the beautifully dressed women she saw and compared to whom she looked paltry in her poor skirt. But when she saw the new wall, which grew and grew, she was immediately reconciled with her simple life in the polders and between the reeds.

Returning to the Fish Gate where her father tried to sell the baskets to skippers and fishermen, she was received with reproaches and beatings.

She cared very little for them. A pixie child had to be treated badly, she knew that since she was six years old. She reckoned that one day the reedlings would hear about it, then they would come back and bring back their changeling. Patiently Hasse let herself be shaken, bruises squeezed that seemed to be part of it when you had dark eyes and black hair and everyone thought you were ugly. But as she got older and lost her faith in the reeds, she also lost that patience. She grew wilder and more adrift and began to answer the beatings with screams, bites and kicks; she struck back. As soon as she had a chance to slip out of the hut, she fled across the city meadows to the Nieuwe Dijk, or to the creeks of the Noorderdiep.

There she hid in the reed and marshes and her family wouldn’t see her for days. Hasse knew the swamps like the back of her hand. She knew the places that first dried up after the winter floods and she built a hut of elm branches and reeds in the floodplains on what once must have been a sandbank when the IJssel delta did not yet have the size that it had today. Here, in what she called her ‘reed castle’, she felt safe and secure and she kept her treasures there: a knife, an iron cooking pot, her bow and arrows.

For she could never have forgotten the painted panel of Saint Sebastian in the Upper Church. As a little girl she thought he was pierced with reed arrows.