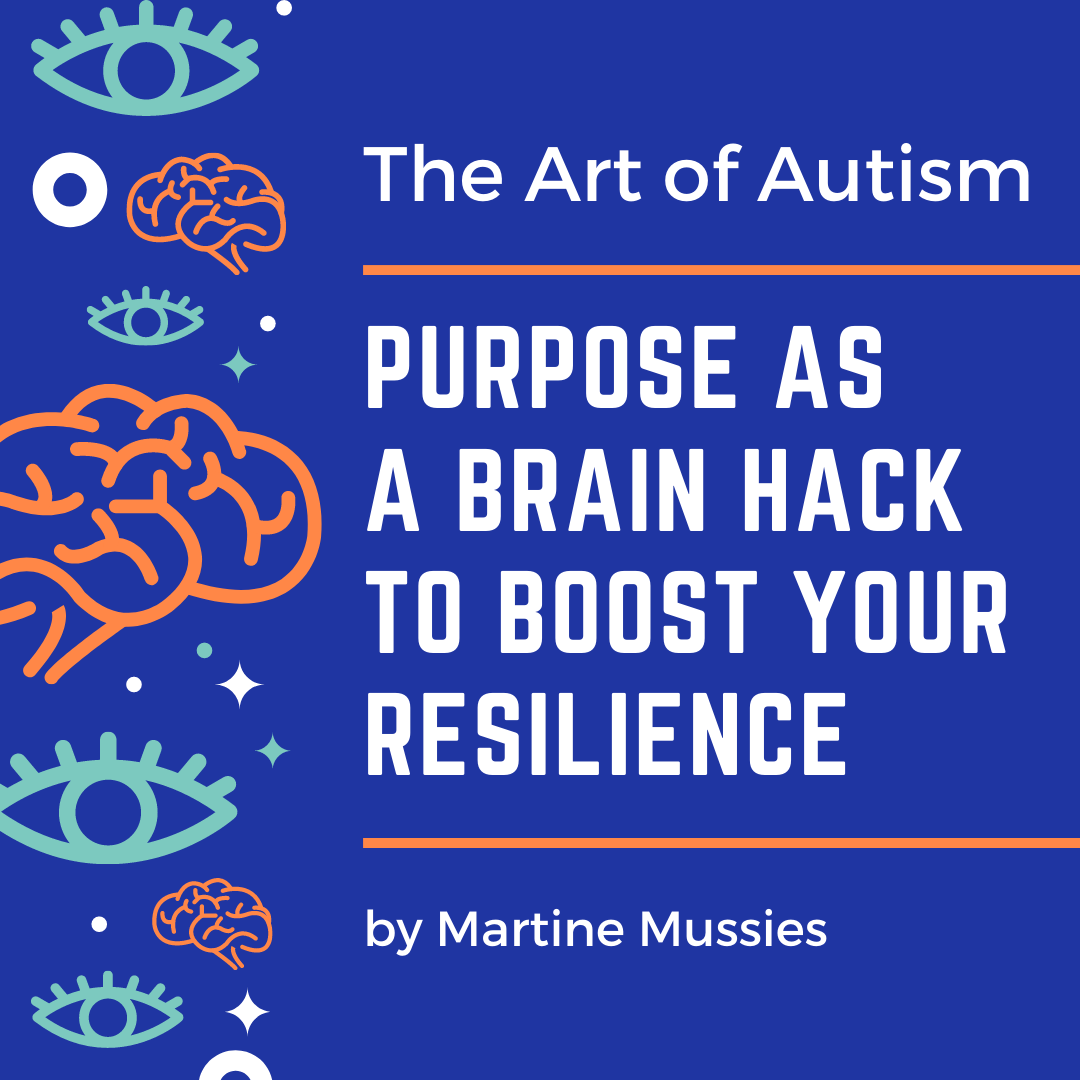 A while ago, I received a postcard of a beautiful Japanese art print. On the backside, someone had written a joke about “fighting like a girl” and concluded with the words “Thank you for being a strong woman in our dojo.” I was happy and touched by this act of kindness. But I also felt a bit puzzled. Being a “strong woman” – or any person, for that matter – when you have autism… is that even possible? In this blog post for the website Art of Autism, I explore this question through the lens of neuropsychology.

Around me I see a lot of women I admire, far and near (both in place and in time), but to be frank – they hardly ever have autism. Because for most of my autistic peers, life is a struggle. If they have ever been described as “strong”, it was often in the context of their autism – so strong how they deal with their terrible disorder or something like that (yuk). How come?

Maybe they have dreams, but then they don’t know how they should ever be able to realize them. Everyday life offers enough challenges. For a long time, my life also felt like juggling with a ball too much. I ran from one thing to the other, desperately trying to get my life in order. And as soon as it seemed to work out just a little bit in one area of my life, it went horribly wrong in another.

I kept up appearances: studied at the university, performed in large concerts, ran my own magazine and television show, published some books of sheet music, and was regularly in the media. In my fantasies, I was a beautiful mermaid, but behind the scenes I was constantly treading water so as not to drown. I am naive, gullible, clumsy, and quick to blame myself. Bad people have often taken advantage of that – for example the “nice” Dutch violin maker I thought I knew, who turned out to be a swindler who scammed me with a confidence trick. And unfortunately, I see this daily struggle and frustration in the lives of many people with ASD.

Sadly, stress often causes the less pleasant characteristics of autism to increase in seriousness. The ability to empathise with the other (theory of mind) can diminish, people are less able to switch to changes (executive functions), or they remain focused on details instead of the bigger picture (central coherence). This leads to a vicious circle, a self-sustaining pattern in which the person with autism constantly chooses the negative switch, runs on the battery instead of the accumulator, and drains their energy “spoons” (Miserandino) and “vessel of self-esteem” (Van Zessen).

I can’t accept that this is “just” the fate of people with autism. That they’re simply outnumbered and therefore misfits in our society, doomed to live a life full of stress and untapped potential. Bad luck, sucks to be you. No, there must be ways, methods and tricks to become more powerful in life, to make the roots of your tree super strong, magnetic, and firmly grounded. But how? What is the secret?

One of the (non-autistic) strong women I know is Sheila, a blogger & photographer. She has both a job as well as two (super cute) children, plus a husband ánd a boyfriend, with whom she travels all over the world. And in her spare time she writes and designs her inspiring weblog. I don’t know how she does it and I’m probably not the only one. Maybe she’s just incredibly lucky? Nope. On her blog Sheila explains that it doesn’t all come naturally for her either. She also has setbacks, and major ones, for that matter. Yet there is a difference between her and most people with autism I know, and that is her attitude. As she writes:

“I’m just someone who’s confident that things will work out. If not in the way I had hoped, then in a different way. I’ve learned to be flexible and that a lot of things really don’t matter. It can put things into perspective quickly.”

Many people with autism just can’t do that. We are quickly overwhelmed, overexcited and frightened. Still, we can learn something from Sheila’s approach, about how to recover faster after a setback. Moreover, her attitude of looking for the bigger pictures also means that in every hardship she chooses to learn from it, so that in the long term her misfortune also contributes to her self-growth and happiness.

Resilience is a characteristic that has to do with mental toughness and overcoming whatever life throws at you. Sheila’s story is backed-up by science, as, according to researchers Karen Reivich and Andrew Shatte, “[r]esilience is a crucial ingredient–perhaps the crucial ingredient–to a happy, healthy life.” But what does resilience exactly mean? And how can you cultivate it, to empower yourself as an autistic person?

In order to increase our resilience, it is important to see what it consists of. That’s why I created the diagram above. As you can see, like most traits, resilience is a combination of nature and nurture, your Self and your surroundings. Although it might be true that most people with autism are born with a disadvantage when it comes to resilience – as we are notorious for being inflexible for example – even in this area there are benefits in being autistic, as we are often more sensitive to what I call “Brain Hacks”. That probably sounds a bit scary, but is rather basic biology.

If you are stressed and/or unhappy, you can call for one of your brain’s seven messengers of good fortune. Let me introduce these neurotransmitters to you:

First there is Endorphin, which you produce during sports, during sex, and while completing small everyday tasks, such as posting a letter or drying the dishes.

Second in line is Serotonin. Although this is a neurotransmitter, about 90-95% of the total amount of serotonin is produced in your intestines. You stimulate the production by healthy habits such as eating breakfast in the morning, consuming enough vitamins and minerals, and absorbing enough sunlight. But it is also present in milk and chocolate (no wonder that people experience fuzzy hygge from drinking hot chocolate).

Third is Adrenaline, also known as epinephrine, which gives you energy, the feeling of being alive – an antibody against boredom. People who participate in extreme sports get excited from the adrenaline rush, because of their extreme focus. We will get back to this focus, that many people with ASD might recognize from being engaged in their special interests. For me, this resonates with Mihaly Csikszentmihalyi’s concept of ‘flow,’ which I experience when I am fully emerged in my autistic hyperfocus, working on something that makes me think “yes – this is why I’m here for.”

As the fourth messenger we have Oxytocin aka the cuddle or binding hormone. Contrary to popular belief, you do not need a significant other next to you to stimulate the oxytocin production. It also comes from thoughts about trust, intimacy and friendship (see also the “context” section of the diagram above). From stroking a pet or plush animal, and even from chocolate and a warm bath, the cosy feelings are caused by oxytocin.

Number five is GABA – short for Gamma-Aminobutyric acid (an amino acid) – which is a natural anxiety suppressant evoked by being focused, for example in yoga, meditation, making music, practising your religion, and martial arts. You can also get some GABA through your food, by eating cocoa, tempeh, broccoli, spinach, tomatoes, potatoes, citrus and various nuts.

The sixth neurotransmitter I’d like to mention is Anandamide, which comes from the Sanskrit word ananda, which means something like “happiness, joy, bliss, delight”. It is the origin of your “runners high” or other delight experienced during and after sportive activities. Anandamide can also be found in black truffles, for example, chocolate can help boost it, and black pepper also can increase anandamide’s physiological effects.

Last but not least, there is Dopamine, the organic chemical that is released when we work on our goals and see progress in ourselves. I saved this one till the end, because in my view, dopamine can show you your way, as it makes you feel good and comfortable whilst working on your goals. And while you are doing so, you will almost automatically meet all the other neurotransmitters described above.

So, what’s a goal? Antoine de Saint Exupery asserts that “a goal without a plan is just a dream,” and many people have said similar things. Such as Dr Phil: “The difference between a dream and a goal is a timeline and accountability.” (Click here to read my blog on goal setting.)

By setting yourself SMART goals you can shape your life as a meaningful road towards your “Why” (as Simon Sinek calls it). Moreover, working on your goals will help you to focus on the bigger picture.

One of my goals, for example, is to make music for other people. That’s why I’m a chorister. Truth to be told: I’m not the best singer. Seriously. My voice doesn’t always do what I want, my sight-reading is flaky, I lack steadiness, my blending, intonation, diction and balance within our choir are suboptimal, I often lose my sheet music, and I struggle to anticipate the rhythm/tempo of the conductor. Thus, I often make stupid mistakes for which I beat myself up.

But I can get over all these things more easily since I started to focus on the bigger picture, which is: what we as a choir have to offer to our audience. What difference does that one little glitch at a rehearsal make in the larger context? Little – or even nothing. In our beautiful church we honour a tradition that goes back centuries, and we touch and move people with our music. And that is one of my goals, that contributes to my purpose in life.

Goals come in all shapes and sizes, of course, but the goals you benefit most from in the end are those on your way to meaning and purpose. For me, these goals are the reasons to get up in the morning. Goal setting will influence your attitude towards all the factors in the image above, thus boosting your overall resilience.

TLDR: the biggest brain hack is finding your purpose.

Disclaimer: this essay is an ‘auti-ethnography’ of the exploration of my own resilience and purpose, surrounded by practical tools and selected stories, and firmly grounded in (neuro)psychology. Although I hope that my writing inspires you to reflect on your own path, it is by no means meant as a self-help article and cannot substitute for the advice of a mental health professional.

'You are so inspiring, I mean, for an autist!'
Autism & Eating
Nunchi

My name is Martine and I am writing my PhD about the Cyborg Mermaid. On this website, you’ll find blogs about autism, cyborgs, fan fiction, King Alfred of Wessex, mermaids, music & musicology, martial arts, musea, (neuro)psychology, video games, and random nerdiness. Feel free to browse through the categories and use the search bar below.

Search this blog for: