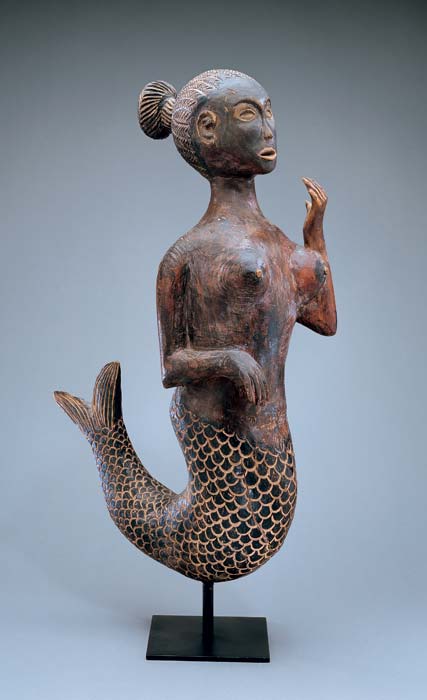 Dona Fish from the Ovimbundu peoples in Angola created this statue of Mami Wata circa 1950s-1960s from wood, pigment, metal, and mixed media. It is currently in a private collection. Photo by Don Cole. The mermaid story about Mami Wata below is written by a user under the pseudonym of lucien_cramp, and republished with the author’s permission.

John walks along the shoreline lost in thought.
In this little hamlet, he was born, he dreams of a future far away from here.
Far from the black soot, the oil stained banks of the creeks within his community. Life here is seems dreary to him and chock full of sickness. It is believed that the pride of the community is the reason.
One of the first oil wells in the country was discovered here and life as the community knew it changed differently than they wanted.
The creeks and rivers teeming with fish and sea life became a pool of death. Entire ecosystems wiped out in just a few years.
He footsteps lead him to a fallen tree trunk and he sits down, weary from his legs that had taken him all the way from his house on the other side of the community to this part of the river.
He glanced around before sitting and did not notice anyone around. Wanting to rest for a while he took off his shirt to allow the cool evening breeze to dry his sweaty body and his shirt, his eyes heavy from tiredness, he closes them for a split second and when he opens them again it’s dark with no sign of the moon. He tried to get his bearings in the dark and he hears singing, he freezes in his step.
He wonders who could be singing so late around the river and he tries to find his way to the source of the voice in the dark,
He walks cautiously, avoiding making noises more than usual that will startle the person singing. Just as he turns a bend in the river he sees her.
Hair long, bare back turned to him, he can’t make out what she’s doing but she seems to be crouched down in the water. As he comes closer, he remembers the stories, fables told by old fishermen of mami wata seen on their overnight fishing jaunts. He had not been one to believe any but here he was wondering whether the person singing was one and just as he took another step, his foot stepping on a broken twig, she whirls around and sees him and dives into the water, he catches a glimpse of her tail, a luminescent green, beautiful under the starlight.
He runs to where she was just a moment ago and watches as she disappears beneath the surface. He realizes that those stories he had heard all his life were true. He calls out in the dark, pleading for her to come back that her voice was like that of an Angel. He hears no reply.
After what seemed like a long time, he notices ripples and watches as her face breaks the water. She asks “ Do you believe I have a voice as sweet as Angels?”
He’s taken aback that she can speak to him- a human but he tries to hide his surprise and replies her “Yes.”
She smiled and just as she made to dive back in she said “You’ll see more of me in the coming days and can hear my voice if you tell the people polluting my world to stop”
He calls back “I can try but I doubt they’ll listen”.
“Try first” she said just as she disappeared back into the water.
He was speechless as his brain came to terms with this surreal experience. Who would believe him?
No one would believe his story just as he had not believed stories of others.

Another day, another offering.
Daffodils and Dinosaurs
The Heredity and Magnanimity of King Alfred
+1

Be the first to reply