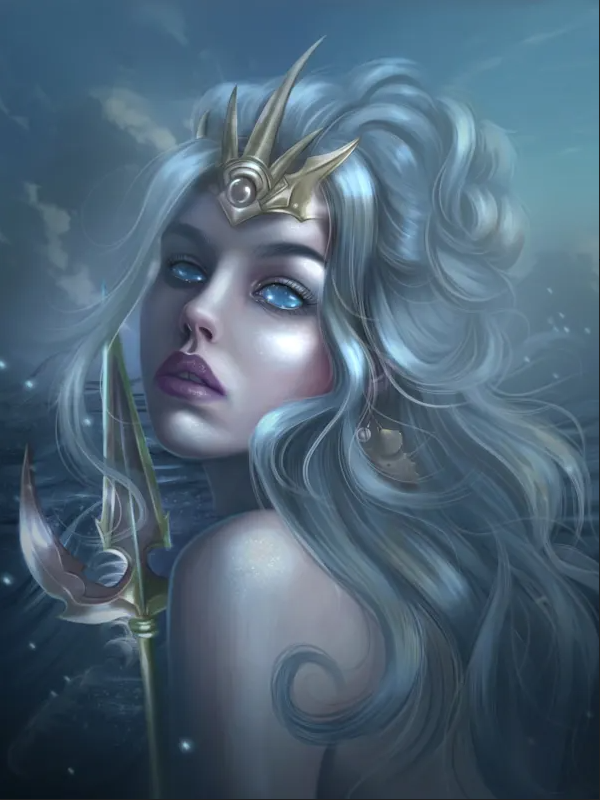 A mermaid fanfic written by sweetbydesign and republished with the author’s permission.

Posidaeja watched as a burst of bubbles flew out of the young woman’s mouth, the sight not unfamiliar. She sighed, taking in a long deep breath of the seawater around her before pursing her lips and blowing onto the human woman drowning before her. The water flexed around the human, allowing a large bubble of air to encase her. The woman settled at the bottom of the bubble, coughing out seawater, her eyes darting around her.
Posidaeja’s lair was not something that humans often visited in their diving gear or submarines. Her realm was dark, hidden from the rest of the world through her own magic and the shifting of the tides. Still, the humans had found her, attempted to tame her, then recognized her as the goddess she was. They would always be simple creatures, but their newest actions towards her made her wonder if they truly were as stupid as she thought they were.

The human inside the bubble of air seemed to have calmed down enough to realize that she wasn’t going to perish. Posidaeja could feel her eyes linger on her face, moving down to her body, and ending at her large tail. The woman was no bigger than Posidaeja’s hand, which made it easy for the goddess to lift the bubble into her palm and study the human within.
The woman’s hair was plastered to her face, making it hard to tell what color it was. Her eyes were wide and blue and she was dressed in what looked to be a sundress, layered on top of multiple shirts. Posidaeja understood why the humans dressed their sacrifices in layers, thinking that it assisted in weighing their victim down and made it easier for her to hunt.
The human woman flopped over onto her side, seemingly overwhelmed with the weight of her clothing and the fact that Posidaeja was watching her. She had closed her eyes and the goddess worried that her time was limited.

“Listen to me,” she whispered, aware of how strong her voice was, even through the waters of the ocean, “I will not harm you. Whatever you were told on the surface was a lie that other humans have taken to be their truth.”

The human cracked her eyes open. She coughed weakly. “What?”
“The humans weighed you down to become another sacrifice for me, correct?” Posidaeja asked. When the human nodded, she continued, “They believe that I am eating those who are sacrificed to me. Some sort of appeasement, if I’ve heard correctly. You will not be eaten and you will not be killed, please know this.”

The woman relaxed in the bubble, nearly flopping down on its bottom with a look of relief on her face. “Then what am I gonna do?” she asked, “Am I going to just stay here forever? Chilling in a bubble until my air runs out?”
“No. In fact, I have a message for those above. They need to stop their pollution of my home.”

Be the first to reply