Learning from the past

Posted on December 7, 2022 Posted in fanfic No Comments 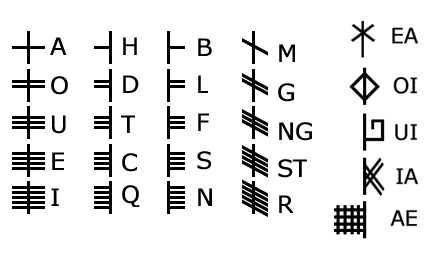 A piece of fanfiction about King Alfred written by “The Ancient Scribe”, published with the author’s permission.

Once upon a time, in the kingdom of Wessex, a girl named Baddo lived in a small village on the outskirts of the kingdom. Baddo was a curious and intelligent girl who loved learning new things. She spent her days exploring the forests and fields around her village, collecting herbs and plants, and studying the animals and insects she encountered.

One day, while wandering in the forest, Baddo came across a strange stone with strange markings on it. She had never seen anything like it before, and she was fascinated. She took the stone back to her village and showed it to her parents, who were equally puzzled.

Baddo’s parents told her that the markings were a type of alphabet called Ogham, and that it was used by the ancient Irish for writing Old Irish. Baddo was excited to learn about this new and mysterious alphabet, and she decided to seek out the wise and kind King Alfred of Wessex, who was known for his knowledge and love of learning.

Baddo packed a small bag with some food and supplies and set off on her journey to the kingdom’s capital city. She traveled for many days, braving the elements and overcoming obstacles along the way. Finally, she reached the city and found the king’s palace.

She approached the palace gates and asked to see the king. The guards were hesitant at first, but they were impressed by Baddo’s determination and curiosity, and they allowed her to enter the palace. Baddo made her way to the king’s throne room and found King Alfred sitting on his throne, surrounded by his advisors and courtiers.

Baddo knelt before the king and explained why she had come to see him. She told him about the stone she had found in the forest and showed it to him. King Alfred was impressed by the stone and by Baddo’s curiosity and passion for learning. He agreed to teach her Ogham and invited her to his royal library.

King Alfred sat with Baddo in his library and showed her the Ogham alphabet. He explained how each letter was written and pronounced, and he taught her the meaning of each letter:

ᚁ is Beith and means birch,

ᚏ is ruis, for the colour red…

Baddo was fascinated by the intricacies of the Ogham alphabet and asked many questions. King Alfred patiently answered all of her questions and encouraged her to practice writing the Ogham letters.

Baddo spent many days in the royal library with King Alfred, learning about Ogham and practicing her writing. She quickly became skilled at writing Ogham and was grateful to the king for his guidance and knowledge.

As time passed, Baddo became known throughout the kingdom as a skilled writer of Ogham, and she was praised for her knowledge and passion for learning. She continued to explore the forests and fields around her village, and she used her knowledge of Ogham to record her observations and discoveries.

And King Alfred continued to share his wisdom and love of learning with all who sought it, just as he had done with Baddo. He was remembered as a great king and a champion of knowledge and education.