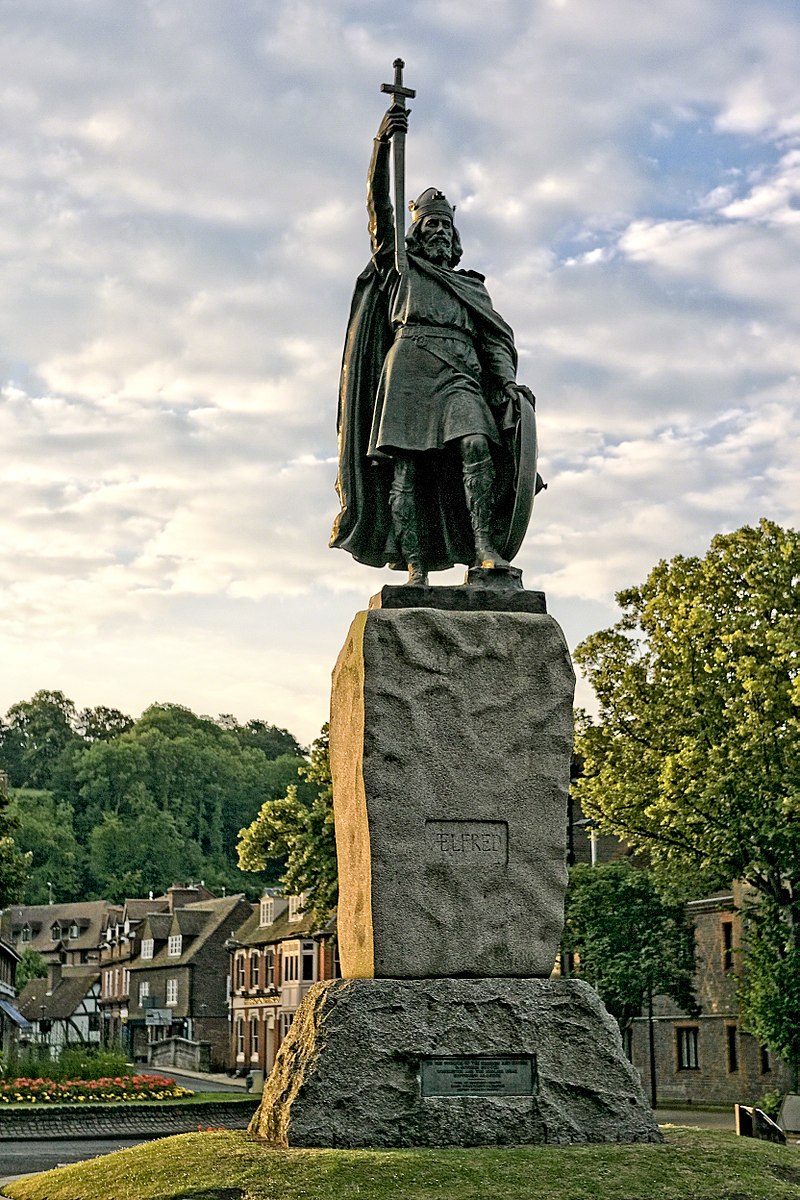 This Friday evening will mark the fourteenth edition of “Old English Fun Time Online” – the superb monthly event of the Facebook group “Old English Enthusiasts” (yup, indeed, one of the two groups that served as a model for Japan Fans).

The theme will be “Holidays” and that made me realise that I never wrote a blog about my wonderful (holi)days in Winchester. So here goes!

From Canterbury I took the old Pilgrim’s Way the wrong way, towards Winchester. This nice, lively town is about 100 km south-west of London. The meandering river is a pleasant stroll. You can enjoy the open air in Winchester in the Dean Garnier Garden. And in the characteristic alleys you will find many cosy pubs and shops. I myself am a big fan of the many charity shops. There you can buy all kinds of vintage clothes and stuff for next to nothing, while supporting a good cause.

In the old centre of Winchester – the area between Middle Brook Street and High Street – you will find the market. Local buskers play cheerful tunes there, which I recognised from John Playford’s collection. From countless white-and-green striped stalls, local entrepreneurs offer their goods: fresh fruit, honey, vegetables, and huge pieces of fudge in all sorts of exotic flavours. As a “foodie”, Winchester is the place to be, for example for a delicious (and generous!) piece of home-made cake at Frieda’s Tearoom (6A Parchment Street), recognisable by its green bicycle with flowers. The streets here are very cosy anyway because of the many flowers and decorations, such as the artistic street posts – do you recognise all the famous paintings on them? For the coffee lovers, there is the coffee lab on The Square, with award-winning latte art.

Another place in Winchester I really enjoyed is on Jewry Street. The restaurant is called Koh Tai (which turned out to be a chain). You can order all kinds of tasty Thai curries in small quantities. And complement them with other tasty snacks, such as tempura spring rolls and sweet corn cakes. The cocktails are also highly recommended here, Koh Tai has won prizes with them for good reason. I tasted Bye Bye Samurai, a variation on the classic Zombie, and Koh Lipe, which was bluer than the Caribbean Sea.

If you prefer a British beer, I can recommend two traditional pubs. On the sunny side of the historic square is The Eclipse Inn, in a 1540s building all Tudor white with brown beams. Another great pub is The Royal Oak, just behind St George’s Street. There you can eat good camembert or fish & chips or vegan soup with a matching local beer.

I also had a great meal in Winchester at Loch Fyne on the other side of Jewry Street. Housed in a beautiful 1509 building, this more upmarket restaurant serves mostly fish and seafood. Their motto is not for nothing “Nach urramach an cuan” or: how venerable is the sea. However, they also serve vegetarian and vegan dishes. And for good cocktails, special cheeses and delicious desserts – black forest trifle, plum & mixed seed granola crumble, chocolate fondant, crème brûlée, sticky toffee pudding, popcorn sundae. Is your mouth watering already?

A history of Winchester

Winchester arose from the Roman town of Venta Belgarum. This in turn arose from an Iron Age oppidum. People lived in this area as early as 2000 BC. And in 200 BC it was the largest Iron Age settlement in present-day England. Numerous grave goods have been found in the burial mounds of Wessex, so we also know that these people traded. In and around graves such as Bush Barrow (near Stonehenge) amber from the Baltic Sea, jewellery from modern-day Germany, gold from Brittany and daggers and beads from Mycenaean Greece were found.

The town was conquered by the Romans in 44 AD and given the name Venta Belgarum. Belgarum is, as you might have guessed, a reference to the Celtic tribe of Belgae who inhabited this area at the time. The first word – Venta – probably comes from the Brythonic word Wentā, which meant “city” or “meeting place”. But it could also be related to the word for “white”, because the city was built on limestone. And from the name “Fort Venta” – Wintan-ceastre – came the present name Winchester. Winchester’s shape can be traced back to its reconstruction in the late 9th century, when King Alfred the Great replaced the Roman street plan with a new layout to better defend the city against the Vikings.

In the 9th century, King Alfred made Winchester the main town of his kingdom of Wessex. That’s not necessarily the capital, by the way, as historians agree in Anglo-Saxon England at this time the court was mobile, so there was no fixed capital. Yet historian Catherine Cubitt describes Winchester as “the principal city of the West Saxon kingdom”. After the Norman Conquest (1066) William the Conqueror declared that both Winchester and London (Westminster) would be capitals and he had himself crowned in both cities. 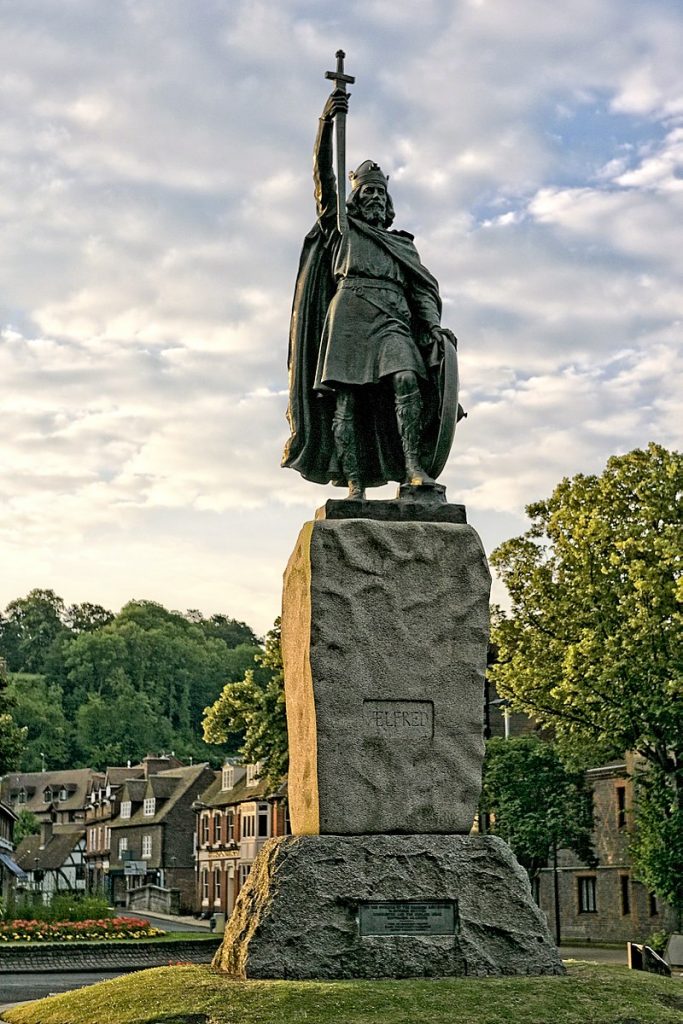 Winchester’s main attraction is its 11th-century cathedral. Winchester Cathedral is not only one of the largest cathedrals in Europe. It also has the longest nave and the greatest overall length of any Gothic cathedral in Europe. Inside this imposing building, you will find beautifully carved wooden ornaments, for example in the 14th century choir stalls. There are also graves of famous people, such as the novelist Jane Austen. And art from the 11th to the 20th century.

I was surprized by the statue of Joan of Arc that had been erected around 1923 (after the pope had canonised her). It was especially nice for me to encounter the Maid of Orléans, because in high school I made a paper about how this “mighty virgin” was used in the centuries after her life by the most diverse groups of people (but especially by Christians and feminists). Also very nice was that during my visit the organist was studying. He or she played all kinds of beautiful music live. Like the hymn “O Lord My Soul Convicted”, which is recorded in the “Musikalisches Handbuch” from Hamburg (1690) as “Winchester New”. That cannot be a coincidence!

I always find it remarkable to be in an English church, but Winchester Cathedral was extra special. Because of its size, because of the role it played in history and because of the exhibition it had. Via the 12th century Winchester Bible and the 17th century Morley Library, I walked up the spiral staircase to “Kings & Scribes”. This is an extensive and beautifully arranged exhibition. You can learn all sorts of things here from remarkable treasures. For example, you can learn about the history of the area (especially the Middle Ages) and the central role that Winchester and the cathedral played in it.

There are the richly painted coffins. Archaeological research has shown that these coffins contained the remains of eight kings, two bishops and a queen. Probably Queen Emma, a powerful political figure in late Saxon England. She was the daughter of Richard I, Duchess of Normandy and the wife of two successive kings of England: Ethelred and Cnut. (Indeed, that Viking from Netflix’s series The Last Kingdom.) Emma’s marriage to this Danish king Cnut was said to be a love match, which is remarkable in that time and context.

More places to visit in Winchester

Also worth seeing in Winchester are the City Museum, the Great Hall and Wolvesey Castle. At the City Museum, on The Square, you’ll find everything about Winchester’s history. From the Iron Age trading centre through Anglo-Saxon glory to Jane Austen’s last journey and the search for King Alfred’s remains. There is also a beautiful scale model of the city, made in 1870. In the three museum galleries, you can see all kinds of interesting excavations, hear the accompanying sounds and play with replicas, costumes and the funny computer animations.

The Great Hall in Winchester

The Great Hall is the only remaining part of what was once a large castle complex. It is indeed “great”: 33.8 metres long and 16.7 metres wide. The hall was built between 1222 and 1235 by William the Conqueror and cost 500 pounds at the time. In the hall, you will find beautiful stained glass and a large round table. Indeed, the table that, according to legend, belonged to King Arthur! The round table is about 800 years old and has a diameter of 5.5 metres. Henry VIII (1509-1547) commissioned the painting of the table in its present form. With King Arthur at the head and the 24 knights around the table. 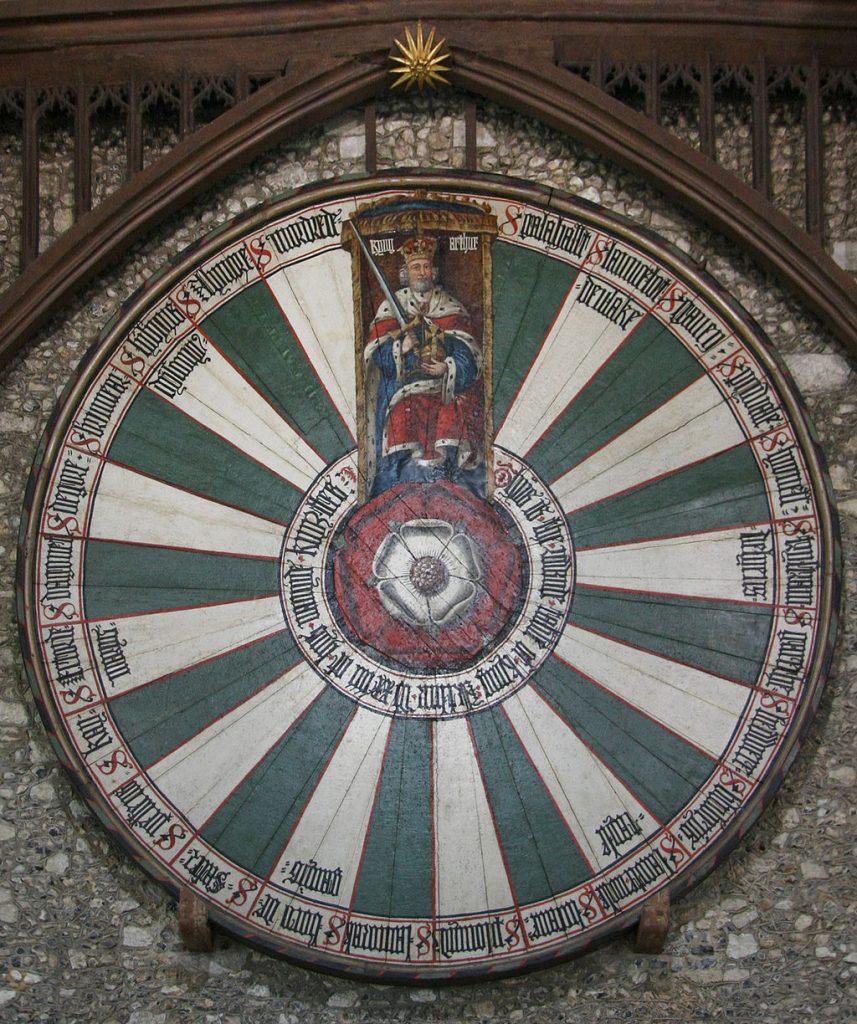 When you leave the Great Hall, don’t forget to take a stroll outside into the beautiful fairytale garden. With a little imagination, you might even meet Lancelot and Guinevere there! The museum shop sells fun gifts for the home front, such as wooden practice swords and large plush dragon cuddly toys.

Last but not least, I was very impressed with Wolvesey Castle. It is a ruined castle within walking distance of Winchester Cathedral. Wolvesey was built in the 12th century by Henry of Blois (King Stephen’s brother). Rows of stone walls and arches have stood the test of time. And you can wander freely through what was the Bishop of Winchester’s palace in medieval times. You can imagine how impressive it must have been for travellers. They could see Wolvesey looming in the distance. In the middle of Wolvesey you will find the dining hall, where the great, luxurious banquets took place. And at the back, to the east, a small outbuilding that must have been the kitchen. This is where the wedding dinner was prepared for the wedding day of Queen Mary l of England and Philip II of Spain in 1554.

My time in Winchester was over far too soon, but I will definitely be back! For new exhibitions in the Cathedral and the City Museum. Also to see the military museum and walk to the Hospital of Saint Cross, Winnall Nature Reserve and the Science Centre (a kind of NEMO). To be continued…