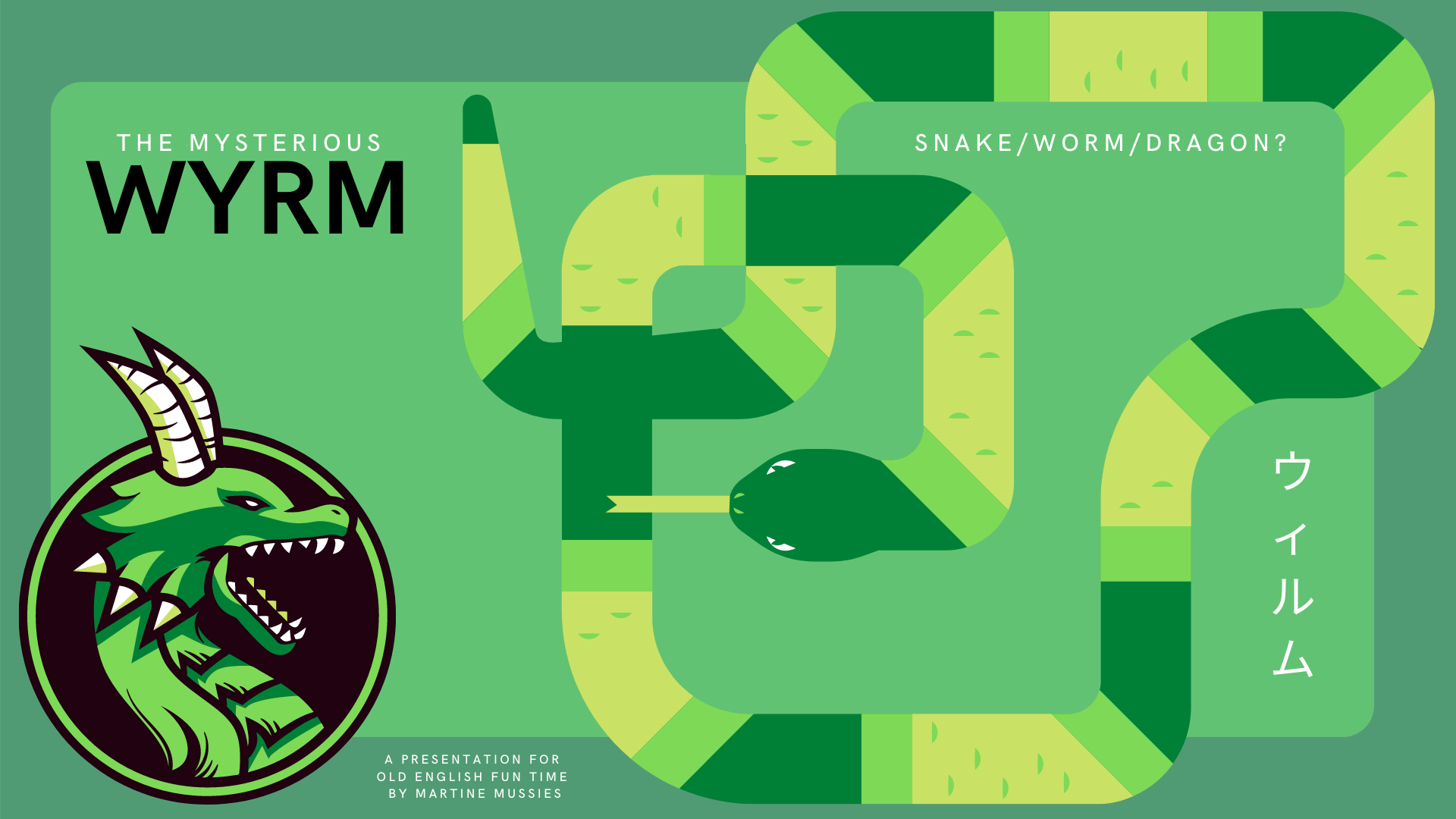 In various pieces of fan fiction #KingAlfred, a mysterious creature makes its appearance: the wyrm. Intrigued by this secretive being, I was inspired to research its earlier appearances. During Old English Fun Time Online, I shared my findings in a short presentation, and it seemed nice to me to further process my / ehm… ‘research notes’ into a blog post. So, for Paulo and other people that have asked me about it: here are some of my thoughts on the mysterious wyrm! 🙂 All comments & suggestions are very welcome, as always.

Since the publication of this blog post, I have incorporated my research on the wyrm in two scholarly publications. Please follow the links below to read them. The unaltered original blogpost follows underneath. [2022 update]

Mussies, M. (2021). “Dashing and daring, courageous and caring”: Neomedievalism as a Marker of Anthropomorphism in the Parent Fan Fiction Inspired by Disney’s Adventures of the Gummi Bears. Dzieciństwo. Literatura I Kultura, 3(2), 60-83. https://doi.org/10.32798/dlk.625

Alfred looked up at the woman kneeling beside him. He could see the honest desire to help in her eyes, so he nodded. “Yes, whatever it may take.” “Then I must be honest about your ailment. It is not sickness that makes you sick, but a beast. Wyrms burrow in the bodies of men while young, and then slowly grow, causing the host great pain until they grow enough to consume them and break free from the host body.” Modwenna shook her head, and her shoulder’s slumped in remorse. “I must do something that might not reflect well upon myself and may be seen as…a sin. I must let you know this before I can help you. Will this be a problem?” Alfred gasped as he felt the wyrm shift in his spine, nearly causing him to curl up on himself again and cry out in agony.

In this TLK fanfic by Surakian, King Alfred gets very sick (when hiding in the Athelney marshes) and Modwenna cures him. She finds out that he has a wyrm in his spinal cord, and her herbal medicine does not seem to work, but when he is as good as dead, she summons the wyrm – that is called Gifer – to go away.

As my friend Evina already knew, this scene resonates with the ideas around snakes that Isidore of Seville described in his Etymologies: “48. Pythagoris says that a snake is created from the spinal cord of a dead person. Ovid mentions this in his Metamorphoses when he says (15.389): ‘There are those who believe the human spinal cord is changed to a snake when the spine, in the sealed sepulcher, has rotted.’ This, if it is believed, occurs with some justice, in that as a human’s death comes about from a snake, so a snake comes about from a human death.” Moreover, the fact that Surakian calls her wyrm “Gifer” immediately refers to the Old-English poem Beowulf.

When I contacted the author and asked her about her inspiration for the wyrm, however, she told me that it is a creature in the Japanese video game series Final Fantasy (1987-). In this science fantasy media franchise created by Hironobu, the wyrm is a recurring enemy. Spelled as ウィルム, the use of katakana already signifies that this is a loan word. Indeed, the wyrm-like creatures from Japanese folklore (often described as 竜 – dragon) all have very different names, such as Ryūjin (龍神), the dragon that took all the bones from the jellyfish.

Other games also mention the wyrm as an enemy, for example Total War: Warhammer II (2017) features the Frost-Wyrm, the Wyrmhunter and a figure called Esteban Wyrm Killer. Traditional tabletop Warhammer includes the Merwyrm. What might have inspired the wyrms featured in these games?

The English dictionary defines a wyrm as a dragon without legs or wings, but that is far from the definitive definition. Other versions describe ‘wyrm’ as a wurm or a (large) snake. The general consensus is that in Middle English the term ‘wyrm’ refers to the earthworm and to creatures such as dragons and snakes. On the whole, it can be argued that historically, the term ‘wyrm’ is often used to refer to worm and snake-like creatures, but can even be used for spiders and wasps. Nonetheless, there is no standard definition for the term.

Various mythologies have their own unique definitions and use for the word. Most Western mythologies depict wyrms as long bloodied fire drakes that are flightless (Flanagan, 2017). Sigurd slew a Wyrm Fafnir in the Norse legend and chronicler Layamon tells how Merlin anticipates that King Vortigern’s castle will collapse through two dragons who fight each other underground. The one ‘so read so blod, worm alre boldest’ (Summerfield 2016).

In the fantasy genres, the wyrm is often more dragon-like. Glaurung was a Wrym from the 1st age of Tolkien’s Silmarillion. As was Scatha the last Wyrm, whom Fram (Ancestor of Theoden and Eomer) slew in the north of Middle Earth. In addition, in D&D and related games Wyrm is the term used for “really old and powerful dragon”, just like in the computer games Total War Warhammer II and the Final Fantasy series.

The majority of etymological research argues that the word in question is used to mean dragon and is of Germanic origin (Lionarons, 1998). Its equivalent in Old High German is ‘wurm’ (Gibka, 2016). These words were replaced by the Latin term draco, draconic which was borrowed by Germanic languages in the Middle Ages. German archeologist Hayo Vierck coined the term ‘wurme’ in 1967 to classify a group of creatures portrayed in ancient art, characterized by snake-like bodies and variable heads (Vierck, 1967). In Germanic languages, the term ‘wurme’ is widely used to denote all saurian-, worm-, dragon-like or snake-like creatures.

The word ‘wyrm’ often occurs in the corpus of Old English. Hannah Millard found no less than 580 instances of wyrmas/wurmas/weormas in Anglo-Saxon sources. The examples from her database illustrate the friction between science and symbolism. As the Anglo-Saxons did not have a gene-based taxonomy, it remains a puzzle how they classified their (fantastic) beasts, especially when considering that they used the label “wyrm” for a wide variety of serpentine creatures that present-day people regard as being completely distinct. Moreover, when writing about worms in the eyes, this is likely meant to be figurative (like gremlins in the computer), but when writing about the worms in hell, this might well be meant literally, as worms were already known to be bodily consumers. The old-English wyrm was often associated with death and decay, signifying corruption in body and in soul.

The best-known example of a wyrm in Anglo-Saxon literature is Gifer, from the Old English epic heroic poem Beowulf. In the single Beowulf manuscript that survived, wyrm is used to describe the final monster which is like a dragon as seen in the statement, “then the wyrm awoke, accusation was renewed” (Wanner, 1999). Germanic cultural art, in particular; the tales of Beowulf conferred a lot of belief in the boar protector and often featured dragon and snake-like monsters which were referred to as ‘wyrms’ (Glosecki, 1986). The wyrm in

Beowulf is called Gifer – “greedy one” – and is an unrelenting consumer, but not inherently evil. Although from Beowulf, it might seem that the words wyrm and draca are completely interchangeable, Satan is never directly called a wyrm. Within the biblical text Genesis, however, in the retelling of the sin, the word ‘wyrm’ makes an unlikely appearance and is used to describe the well-known serpent in hagiographical literature (Flanagan, 2017). This is interesting for the snake has often been linked to the female. In many Medieval depictions, Eve – a symbol for all women – and the snake are very much alike, adorned with symbols of vanity such as an exquisite hair style, a crown and even make-up. Could the wyrm represent the Devil, through the sin committed by Eve? A pointer in that direction could be that, in various other stories, Mary (a symbol of purity) tramples the snake, thus restoring order.

In Middle English literature, we find the worms in the Tales of Caunterbury (1387-1400) – aka The Canterbury Tales – by Geoffrey Chaucer (1343-1400). According to the Pardoner’s Prologue, cattle can be cured with the shoulder bone of a holy Hebrew sheep, when “That any worm hath ete, or worm ystonge” (69). Apparently, the worm is not only dangerous when swallowed, but it also has the capacity to sting, like a bee or a wasp. It remains a mystery what these worms could look like.

One of the most famous attestations of the wyrm plays with this mystery. It is the wyrm in Riddle 47 of the tenth-century Exeter Book, Exeter Cathedral Library MS 3501, also known as the Codex Exoniensis. The whole text is as follows:

Its formal equivalence in present-day English would be “A moth ate words. To me that seemed a fantastical event, when I found that wonder out, that a worm swallowed the poem of a some person, a thief in darkness, a glorious statement and strong its foundation. The thieving stranger was not a whit more wise that he swallowed those words.”

Side note: I was delighted when I first read this charming little verse, as I am a “bookworm” myself and as the riddle resonated with one of my happy childhood memories, when we sang the Dutch round “Neemt mij in der hand” – one of the sparkling stars glowing between the mostly dry prose of the chronicle “Neder-landtsche Gedenck-clanck” (1626) by Adriaen Valerius (c1575-1625).

Anyway, back to riddle 47, in which a secretive being comes like a thief in the dark, to eat some words. For a modern reader, the answer “bookworm” might be the first thing that comes to mind, but I think that Anglo-Saxons might have had different associations with the word “word”, as something to be spoken and heard – similar to our ideas about music, which is not the same as sheet music. This thought is in line with the “wera gied sumes” that is eaten, a poem or a song. Maybe even a psalm, by David, as 21:7 says “I am a worm – and no man”. If taken less literally, the answer could also be a bad student, who reads and learns but does not become a whit the wiser.

In my presentation, I joked about this being a “lousy riddle” – hinting at the possible answer “booklouse” – but that was not because it seems to give away its answer in the first word. On the contrary, I have to admit that I do not know the answer. A moth eats fabric, cloth… not paper. The word “moððe” might be related to the Old English “maða” – which is the maggot (that also devours cloth). So the answer could not be moth, as the moth could maybe swallow some of the binding of the book, but not the words, as the riddle suggests.

When close-reading the text of the riddle, we find that the animal changes. First it is a moth (a concrete animal, that can be classified through gene-based taxonomy), then it is a wyrm. OK, maybe the wyrm is the larval of the moth, then? But it doesn’t end there, the creature is a thief in the dark and finally: a stranger. Curiouser and curiouser, or as Thijs Porck commented “it gets more and more vague”. Maybe, this riddle can teach us once more that asking questions and exploring possible understandings through storytelling is more important than answering. Then it would make sense that the shapeshifting Wyrm ate his own definition… 😉

Flanagan, G. (2017). The early bird is the wyrm: if and how the literary use of wyrm in Genesis A & B and Beowulf informs its linguistic meaning? Innervate 10:91-97. Retrieved from: https://www.nottingham.ac.uk/english/documents/innervate/17-18/q33221-ranait-flanagan.pdf

Gibka, M. (2016). Meet the Dragon: A Brief Study of Dragons in the Harry Potter Series and the Inheritance Cycle. Imaginary Creatures in Medieval and Modern Fantasy Literature. Retrieved from: http://www.gibka.pl/06_Martyna%20Gibka%20-%20Meet%20the%20dragon.pdf