For me, one of the most puzzling aspects of autism is still the “road-to-overload”. Sometimes the day seems like a four-lane highway that you smoothly cross over, another time you feel like rope dancing over an abyss… through snow and blizzards! But quite recently, I encountered the hashtag #spoonie, that refers to people who use the so-called “spoon theory”, a metaphor that enables users to concretise their energy levels.

The spoon theory has been widely accepted as an accurate description of the predicament that people with chronic illness find themselves in. In addition to offering an explanation that both the chronically ill and healthy people can relate to, it has also provided a platform for people with chronic illnesses to interact (Gonzalez-Polledo & Tar, 2014). People from across the globe who can relate to the spoon theory identify as ‘spoonies’ and share their experiences on various social media platforms (Schultz, 2017). The theory in question was conceived by Christine Miserandino, who lives with lupus (no, not with a wolf, but with a very nasty chronic autoimmune disease) and was trying to explain to her friend what that was like, by using spoons. On the whole, the theory helps to explain how people suffering from chronic illnesses have to limit their energy expenditure so as to get through the day.

As such, the activities that an individual undertakes in the course of the day cause their energy levels to reduce hence the number of spoons reduces. These spoons can only be replaced or recharged when the person is resting (Bro, Gareis & O’Leary-Davidson, 2018). Therefore, chronically ill persons always take caution to ensure that their daily activities are planned and that they do not deplete their energy reserves and end up tapping into tomorrow’s energy reserves (Fox, 2018). Moreover, many persons are wary of threats that could steal their spoons (illnesses, infection, lack of sleep, bad luck in general etc).

The spoon theory might initially be developed for people struggling with bodily issues, it can be illustrative for people with limited mental energy as well. (Personally, based on my studies of neuropsychology, I think that most mental issues can be framed as symptoms of bodily causes, but that is something for another blog.) Because of that, the theory itself has gone far past its roots and can be helpful to a wide variety of people, including those with ASD like me.

The spoons are a way to help me self-regulate my energy levels and to figure out (and hopefully one day predict) what I may or may not be able to do in terms of interpersonal contact, sensory input, switching etc. (in a certain context) to prevent a shutdown/meltdown without borrowing my spoons against the day after.

In my experience, the spoon theory can also be helpful for the neurotypicals around me. Just as Christine first used it, it can help a friend by providing a framework that allows him/her to grasp something entirely outside his/her own lived experiences. In my experience, it can also help stressing the difference between unwillingness and inability, as it perfectly illustrates the separation between what I’d like to do and what my autism dictates. By explaining that I have only two spoons for the evening, for example, I can avoid disappointments. Thus, my partner, friends and family know what to expect (for example: either we go to the cinema or we are eating out, but not both) and I feel freed from the heavy burden of guilt (as I am always the game breaker / party pooper). Win-win.

The theory can be used to express the limited physical and mental energy that people with (so-called) disabilities, mental illnesses and chronic illnesses have to operate with (Pashby, 2018). Most importantly, it should be noted that these energy units or rather ‘spoons’ are recharged during rest periods. As such, if an individual has sleep difficulties, he or she may not enough energy to get through the next day. But in my experience, it is also possible to “win” extra spoons by doing things to reload and reinvigorate. For people with ASD, these things are often connected to our special interests. When parents of autistic pupils told me about the “uselessness” of the hobbies of their child, the spoon theory was a good way to explain them the necessity of these.

On the whole, the spoon theory is a disability metaphor which can be applied in different contexts. For people with ASD and their surroundings, it might be useful to think and talk in terms of spoons to become and stay aware of the autistic person’s limited energy resources. 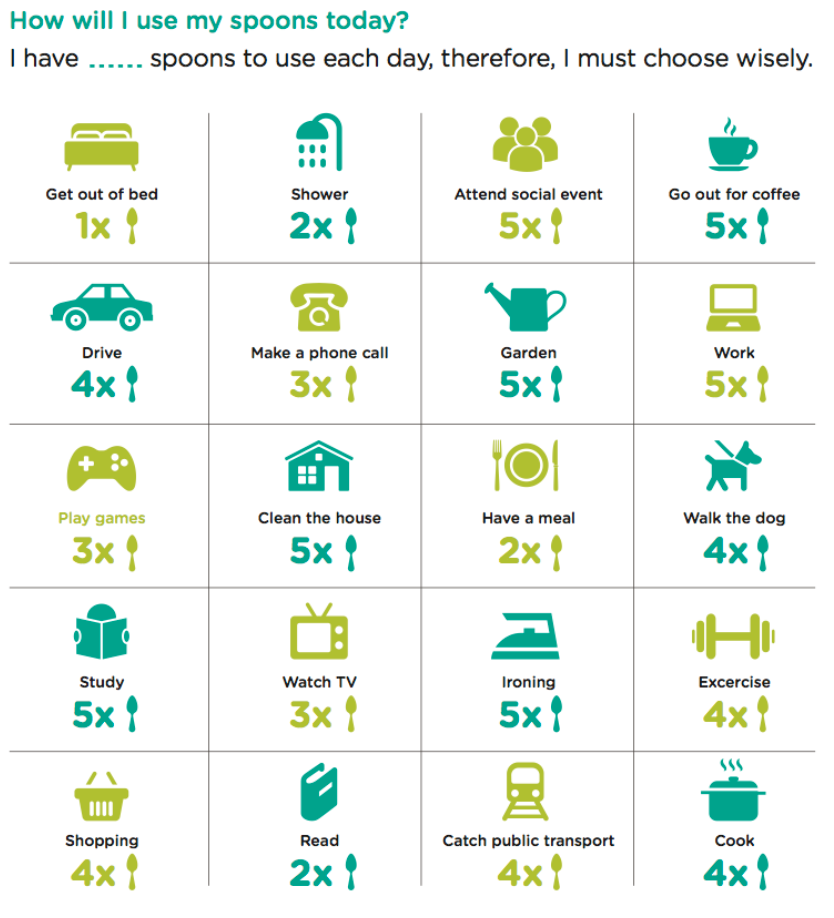 Miserandino, C. (2003). The Spoon Theory. But You Don’t Look Sick? Retrieved from: https://cdn.totalcomputersusa.com/butyoudontlooksick.com/uploads/2010/02/BYDLS-TheSpoonTheory.pdf

Fox, A. (2018). The Spoon Theory. Retrieved from: https://www.huddol.com/chronicpain/the-spoon-theory-is-a-metaphor-used-to-explain-the-reduced-amount-of-energy-available-for-activities-and-tasks-that-may-result-from-a-disability-a-chronic-illness-or-a-mental-illness-spoons-are-a-4v8g8u1r1q

And in case you were wondering about the header image… 😉 at the SBB (where I studied ceramics) I learned how to create bisque molds. And this is one for a ceramic spoon.