Different from penguins: Representations of polyamory in Netflix’s Atypical 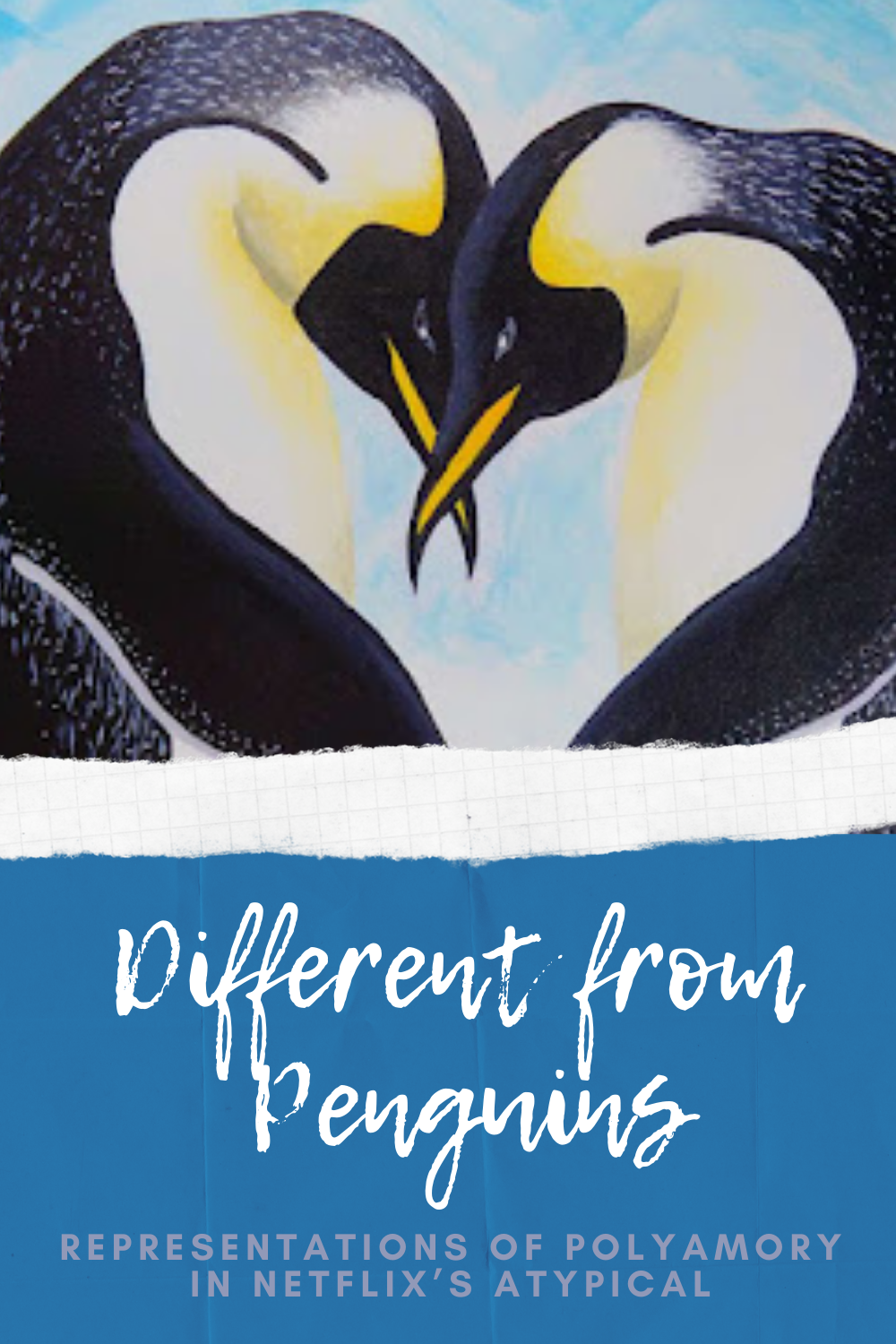 Sam Gardner, the protagonist of the Netflix series Atypical, has an obsession with penguins and Antarctica. He tells us early on that penguins have a pattern of behaviour that is not true when it comes to humans: they mate for life. Throughout the series, Sam will explore (like the great explorer and researcher that he is) different ways of connecting with women. In this article we will delve into this issue and analyse how the series addresses love in general and polyamory in particular.

This blog was originally written for PolY-Gen.

For those who have not seen the series, the story revolves around Sam (Keir Gilchrist), who was diagnosed with autism spectrum disorder (ASD) when he was 4 years old. He lives in a house in the suburbs of an American city with his parents, Doug (Michael Rapaport) and Elsa (Jennifer Jason Leigh), and his younger sister, Casey (Brigette Lundy-Paine). The series begins when Sam turns 18 and he expresses at a family dinner his desire to get a girlfriend and have sex with her, causing stupor in his parents and laughter in his sister.

“Penguins mate for life… So penguins aren’t like people”

The metaphorical use of penguins in the script of the series is not accidental. In the words of Sam: “Penguins mate for life… So penguins aren’t like people… They’re better.” The penguin nature of having a life partner is linked to a monogamous perspective, since they reinforce the idea of “everlasting love”. They are also represented as examples of responsible union, reproduction and parenting, given that they divide the tasks depending on whether they are males or females. In this sense, the (mis)representations of polyamory in the series are clearly coming from a monogamous framework.

Penguins are impregnated with the discourse of heteronormativity and the naturalisation of monogamy, and they are used as a frame of reference to analyse human relationships and couple conflicts that arise in the series. The reality is that human relationships are very complex and cannot be reduced to choosing a partner for life. If penguins represent the ideal, then what is left for divorcing marriages, for couples seeking to incorporate a third person into the relationship or who cannot so easily decide what to do? All these issues that originate from the monogamous perspective only lead to misrepresentations of polyamory, and pave the way for humans to end up being represented as the bad guys. However, the series manages to make the audience empathise with all the characters and their dilemmas.

One of Sam’s mentors is Zahid (Nik Dodani), a funny coworker who is obsessed with picking up girls. He considers himself an expert in love affairs, thus he advises Sam on issues that are especially difficult for a person with ASD: smiling discreetly at a woman, sleeping with her, or breaking up a relationship. His teachings will be crucial in Sam’s journey and will help him navigate his “expeditions” in the best possible way.

On the other hand, we have Paige (Jenna Boyd), the perfectionist high school classmate immersed in countless extracurricular activities who falls in love with Sam. She is one of the few persons who can understand him almost perfectly and Sam had his first sexual experiences with her. Being his first girlfriend, she is also the first girl he broke up with. Paige also proposed Sam to have a casual relationship, and perhaps this is the closest we get to seeing Sam from polyamory, as he seems more akin to the penguin lifestyle.

One of the first truths Sam must face on his love discovery adventure is his mother Elsa’s decision to cheat on his father Doug. This flimsy marriage goes into a terminal crisis when Doug learns that his wife was unfaithful to him. From that moment on, a process of rapprochement and distancing between these two characters starts. Both begin to wonder what degree of responsibility each had. Was Elsa’s infidelity a one-time thing? Were there any other problems in the relationship? Does Doug also have responsibility?

Then the question of normality appears. Like their son, Sam’s father and mother now have to learn to live in a world they do not know: a world of single people. They struggle to connect to other people again. Seeing that her children demand more and more independence from her, Elsa throws herself into the care of other living beings, such as a cat and some plants, while she waits for her husband to forgive her. Meanwhile, Doug is attracted to a new woman he met, but he seems to have forgotten the little rituals that go into courtship and cannot clearly communicate his intentions to her. The series also shows the problems of restoring trust in a troubled couple. How to relate to your ex? How do you relate to your children in this new relationship? And if love survives infidelity, how to behave after that?

In terms of non-monogamy, the most interesting relationships are the ones of Casey with her boyfriend Evan (Graham Rogers) and girlfriend Izzie (Fivel Stewart). A new development there is that the series does not appeal to the idea of a “true love” (in other words, a revealed truth that illuminates Casey) but moves in ambiguity, in loves that do not know labels between heterosexual and homosexual. If she loves Evan does that mean she doesn’t love Izzie? If she’s okay with Izzie does that mean she shouldn’t be with Evan? Are all three capable of carrying out a ‘trouple’ or other form of polyamory, as it is currently defined? Even though the series shows that both loves are possible, it never suggests that there may be a polyamorous triangle between them and dismisses the idea of a vee relationship by showing Casey at a crossroads where she must choose for a monogamous relationship with either Evan or Izzie.

“Sometimes I wish I was normal, but nobody’s normal”

What Casey, Zahid and Paige have in common is the way of bonding with Sam without granting him special treatment, but trying to get into the logic of his world. Because what is constantly in question in the series is the intention to deconstruct an overrated notion of normality, since, in this world as complex on a linguistic level as linking, we all experience occasional setbacks to socialise when people are unknown or even hostile to us. Despite not being autistic, who has not felt disoriented in a meeting by not knowing the codes of conversation and behaviours?

Visibility and representation are important in the media. Seeing someone with whom you can relate can help you realise that you are not alone. And the same happens with situations that are considered taboo: if we do not know them, we will not know how to deal with them. For example, why are most people afraid of polyamory relationships?

The sentimental and sexual revolution has arrived, and viewers are witnessing it thanks to series like Atypical. Although there is still a great majority of fictions that represent classic love relationships or non-binary relationships from a monogamous perspective, the popularity of this kind of series is crucial for the intellectual evolution of the audience.

Series like Atypical that dedicate many minutes of screen to portraying homosexual or open relationships, seem to focus part of their show on something that they know is not perceived as natural for everyone. Perhaps, in a few years, there will be a series in which these types of relationships are just a detail and not a taboo theme. In conclusion, Sam’s adventures seem not to have come to an end yet and the characters in Atypical still have a lot to say about love and the ideas of love that our current societies have. The first step is to recognize that we are not penguins and that we have the right to doubt, to experiment and to fail and learn in our “expeditions” just like Sam does.