I am not your Manic Pixie Dream Girl 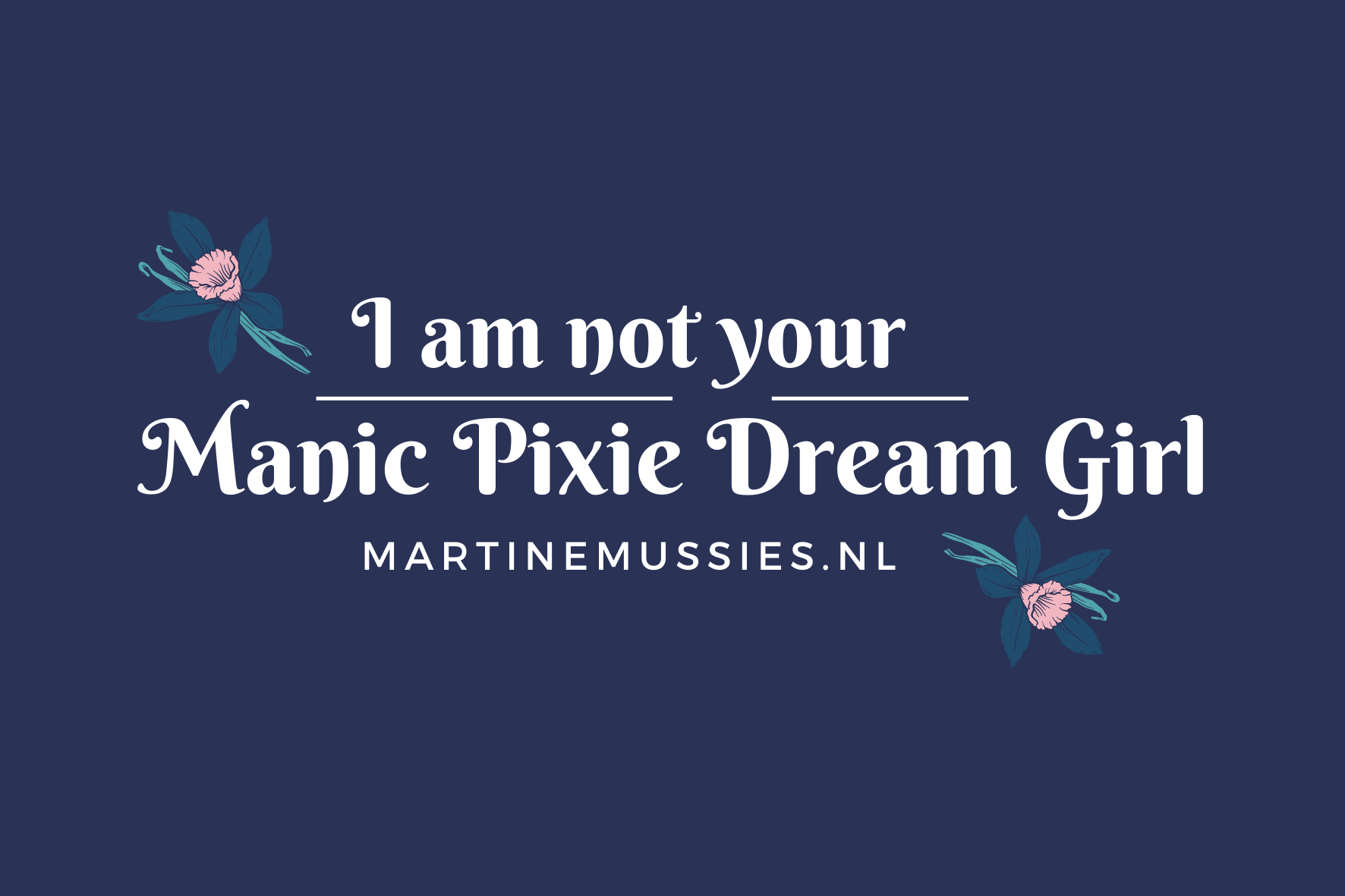 Dating is difficult, complicated, messy, and awkward for everyone, I assume. But autism adds an extra layer of turmoil to that already unstable cocktail. Especially if you’re bisexual—and those last two identities often go hand in hand. Still, relatively little has been published about these intersections. In this essay I would thus like to share something of my experiences, somewhere in the triangle of dating, bisexuality, and autism.

Of course, I cannot speak for all women with autism, but I can tell you that for me, the whole game of dating seems to work a little differently than for most neurotypical people I know. “You don’t participate in the ritual dance,” my partner once eloquently said. Where others seem to see the dating game as such a dance, of challenging, teasing, sometimes taking a distance, then coming closer. I simply stand next to someone, I take their hand and if it’s up to me, I won’t let go.

Netflix’ Love on the Spectrum (LotS) is therefore bizarrely recognizable to me from the first minutes of the show, when Michael shows the beautiful wood carving he made five years ago for the lady still unknown to him, who one day will be his future wife, and later when he describes somewhat bitterly that girls his age are actually mainly interested in “intercourse” and not in a steady relationship. I often fall into that trap.

Or take Chloe from LotS who, when talking about what she wishes for, indicates that a potential partner should also love Marvel, so that they can talk together about the new films and comics that are coming out. Check—I always thought I would need someone to do performances and concerts together. And that, too, has screwed me up more than once.

At first sight, the sad incidents from my own love life seem to be mainly about the naivety and gullibility that go with my autism— and not so much about bisexuality. Nevertheless, I think the fact that I am bisexual and profiled myself as such on dating sites has contributed to the misunderstandings. For example, when a girl calling herself “bi-curious” only wanted to kiss me to turn on her boyfriend. I thought she liked me and I felt like an object. Used. As if my feelings were worth less than those of the straight couple.

In her fairest moment, my ex-girlfriend Steampunk Redhead said, “I just fear that in the end, you’d rather be with a man,” and from that uncertainty she withdrew—or in modern dating jargon she “ghosted me.” Maybe this was just an incident that had more to do with her own psychological make-up. Yet it is striking how many of my exes—men and women—have made statements indicating that a relationship between two women is less real/valuable in their eyes than a relationship between a man and a woman. Think of men’s remarks like, “I would break up if you were cheating on me; well, not with a woman, of course, I’d find that exciting.”

The latter is also problematic—many of the men who pretended to want to have a relationship with me did so as they hoped that dating me would be the shortcut to having trio-sex with me and a friend of mine. When I found out that one of my exes, let’s call him The Contrabassist, had been on a trip to Paris with another woman without telling me, he was also quick to refer to my sexual identity: “Why do you claim me like this?! I just want to have a fun and relaxed time with you, play music and have sex together, have a threesome or a quartet… that’s what you do, right, you do it with everyone, man or woman or somewhere in between?!”

As far as I can judge, these statements were sincere, as if, for these men, bisexuality is a synonym for promiscuity. Don’t get me wrong, if someone wants to have several hookups one after the other, I will be the last one to judge. But it is the prejudice about bisexuality that makes me angry and sad. I am bisexual and apart from that I am “the most loyal dog in the kennel” (as a friend once described me), and those things are totally separate in my world. Yet also that inner image regularly clashed with the reactions of the outside world.

What was it, then, that got people on the wrong track so often, in my teens and twenties? In the words of a good friend: “It’s the whole picture—a kooky, colorful loving free spirit. Colorful, lively, bubbly, funny, a bit artistic. You are always full of surprises, happy tunes, and funny outbursts. Everything is welcome; you listen for hours. You cheer people up. And then you are bisexual and talk enthusiastically about sex…” It wasn’t until I went to study film theory tropes that it clicked for me: apparently, men often confuse me with the cardboard character of the Manic Pixie Dream Girl.

“The Manic Pixie Dream Girl is that bubbly, shallow cinematic creature that exists solely in the fevered imaginations of sensitive writer-directors to teach broodingly soulful young men to embrace life and its infinite mysteries and adventures.”

According to popular descriptions, a MPDG “lives freely and loves madly.” She is “like a ray of sunshine into the otherwise drab world.” And she lives “every day to the fullest” and “always in the moment.” In the films using this stock character the MPDG often doesn’t exhibit a strongly developed inner self, let alone a desire for personal growth, independent goals of her own and mutuality in the relationship. She is just there to support, enable, and provide for the male character in the story. Which is strange, for women have a life of their own. And besides, why would a grown-up man need a girl to “fix” him?

Nathan Rabin, the film critic who coined the term, described the MPDG as “an archetype […] that taps into a particular male fantasy: of being saved from depression and ennui by a fantasy woman who sweeps in like a glittery breeze to save you from yourself, then disappears once her work is done.” Thus, as Gordon So (2019) explains, “the trope reduces women’s individualities to a type in a disparaging manner, similar to the ‘dumb blonde’ stereotype where a type is used to mock women who possess certain traits.” As I often quite like the movie characters based on the MPDG trope, I do not understand why they are reduced to playing only this role. I would love to see them as the protagonists of the stories, like Pippi Longstocking in her 20’s, 30’s, or even 70’s. She could be the female hobbit to bring the ring to Mordor! But up till today, the MPDG is a two-dimensional and sexist portrayal of women and this is harmful.

Steampunk Redhead tried to frame herself as a MPDG—skipping over any complicated feelings, just presenting herself as a carefree sunny spirit—and then had to break out of that framework. The Contrabassist resented me for not being a MPDG. When I pointed out to him that I am a living creature, with feelings and wishes, he replied that I should “quit being so dramatic” and went on telling mutual friends and fellow musicians about this “complete shift” of mine, calling me “hysterical” and a “Borderliner.”

It speaks volumes about the expectations with which he started dating me, a quirky and colorful bisexual girl. The histories of oppression of unconventional women by labeling them as “hysterical” have been well-documented. Calling someone a “Borderliner” is just old wine in a new bottle, and a very nasty way to dismiss a group of people with mental vulnerability. (I consider myself lucky that I do not have to suffer from an emotionally unstable personality and all the prejudices that come with this label.) Apparently, the Contrabassist would prefer to have his girl blissfully wrapped up in fiction, rather than reality. And when the MPDG fiction did not fit his experiences anymore, he just switched to the opposite trope—the “female hysteria” narrative—to tell our social circles about the break-up. Both these stories are equally shallow and excessive. Myth-making like this fills the empty vessel for those who, in Jungian terms, haven’t integrated parts of their unconscious self into their conscious ego, and thus leads to unrealistic expectations.

That’s why I’m happy with a series like LotS, because although it’s easy to come up with a whole list of criticisms—the participants are mostly white, middle class, and the show is full of bad advice, infantilizing speech, lack of nuance, sentimental, stereotypical representation, dumb musical cues, etc., etc.—the show is about real, realistic people. No shallow MPDGs or “hysterical women,” but multi-facetted portrayals of interesting persons. Like Chloe, who dates both men and women, and finds a spark when plucking sunflowers with Lotus: “I can’t stop smiling!” and “We were talking non-stop!” And it is good that the series emphasizes the importance of talking.

Communication in queer relationships is perhaps even more important, because you do not want to follow the social escalator. And communication can be difficult for people with autism, especially if you have to deal with all kinds of unspoken expectations and prejudices about your sexual orientation. If a woman is looking for a man on a dating site, it is assumed that she is heterosexual. If as a woman you are looking for a woman, then you fit in the lesbian box. But if you insist that you are bisexual, you soon come into contact with all kinds of other assumptions. And that can be very confusing.

Stories matter as fiction creates real life. Many individuals, especially those with an avoidant attachment style, do truly believe that there is a “perfect” person for them, somewhere, and try to present themselves as “perfect” as well. Looking back, I recall a conversation I had with Steampunk Redhead, on a picnic with her kittens. After eating some of her glitter cupcakes, she started creating me garlands from daisy flowers. “I am just always happy,” she said, and although I knew that this was not true (she had scars from automutilation), I did not consider it to be a red flag. Same goes for the Contrabassist on our first date, who told me, “You are a little crazy, heh?” with twinkling eyes. When I tried to have a conversation about this comment of his—“please define crazy”—he just made a joke out of it. But somewhere deep down, I already knew that he did not see me for who I was, that he was fooled by my appearance, just like Steampunk Redhead (subconsciously) tried to fool me.

No matter how quirky you are, which colors you dye your hair, and whether you are bisexual or autistic or both—we are all on this planet to be the heroes of our own story, not two-dimensional supporting roles in somebody else’s. I am happy with LotS, but still waiting to see movies in which a man leaves his head with MPDG stardust/dreams/fantasies behind to marry an emotionally supportive adult woman, who has her own life story to live. No need to hide or even toss your magical joie-de-vivre, you can be a cheerful, quirky lassie if you’d like to, but just be careful about being “manic pixie-zoned” by yourself and others. Discover yourself in your own terms and allow others the same, for idealizing a person actually devalues them.

Simple poetry // to resist and to reveal // grim realities
Auti-influencers
'You are so inspiring, I mean, for an autist!'

12 Comments on “I am not your Manic Pixie Dream Girl”