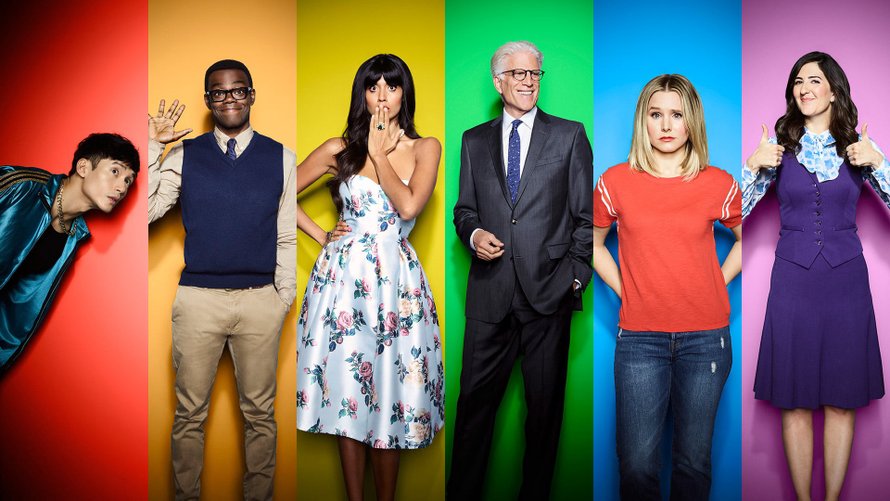 At the beginning of the 21st century, the philosophical discourse concerning good and evil seems to be subsumed into three major areas; meta-ethics which describes the nature of good and bad, normative ethics concerning how human beings ought to behave and applied ethics which attends to particular moral issues. All three of the above concepts find expression in the network television landscape, most explicitly through the Netflix sitcom The Good Place.

The Good Place dramatizes actual ethics classes and concepts on screen without dumbing down the concepts being described. In this way, it serves as an informal educational tool. This post – originally written for the American Philosophical Association aka APA – will explore how the series works as a practical guide-piece to ethics and an easy to grasp introduction to the discipline. Moreover, it will demonstrate how classical dilemmas−in particular, the trolley problem−can be used to elaborate on the complexity of moral decisions.

The Good Place delves into the ephemeral nature of life, the nature of good and evil, morality and reformation among other philosophical and ethical dilemmas (Broverman, 2019). These philosophical questions are tackled with aggressive optimism and joyful silliness through the development of the four major characters in the show (Turner, 2019). Ultimately, The Good Place revolves around two fundamental human questions; why should people be good? And what does goodness have to do with the afterlife?

The show explores various dynamics of goodness and philosophical concerns that surround virtue, raising some controversial concerns. First, there is the question of whether good deeds automatically make a good human. Some possible answers to this question are expressed through the characters Tahani Al-Jamil (Jameela Alia Burton-Jamil) and Eleanor Shellstropp (Kristen Bell). Despite raising $60 billion for charity, Tahani ends up in the bad place because she did these acts to spite and outshine her famous sister and to win the approval of her parents. Eleanor, on the other hand, goes on an arduous task of performing good deeds in the afterlife in an attempt to redeem herself. Her efforts do not pay off because she does these deeds to stay out of the bad place. Thus, the series exemplifies the idea that intention and motivation are the primary determinants of good and bad (Dunn, 2018), where self-interest sullies all. As Michael (Ted Danson), the series’ all-knowing judge slash immortal demon, points out: “You’re supposed to do good things because they are good – not for moral dessert.”

TV writer and producer Michael Shur not only dramatizes ethical concepts and frameworks but also uses the character Chidi Anagonye (William Jackson Harper); a professor of moral philosophy, to offer explanations to these concepts and other philosophical questions raised (Travers, 2019). Season 1 is dotted with scenes featuring Chidi rolling out a chalkboard and breaking down ethical concepts to his student, Eleanor. As the series progresses, Chidi’s students grow in number and complexity to include the demon Michael, Jason and Tahani. Whereas Michael largely answers questions concerning the meaning of our actions and how these actions play into the concept of the afterlife, Chidi answers most controversial questions that arise in the course of his classes. For example; how can we know that we are doing good, especially when there are so many unintended consequences? Could it be that the unintended consequences from an action somehow, retroactively, make the original action itself bad?

Alluding to Leo Tolstoy, Chidi offers a solution to the above question by stating that, “Remember that there is only one important time and that is now. The present moment is the only time over which we have dominion” (Morrisey, 2019). In this manner, Shur provides rational human answers to the complex questions that are raised in the sitcom. Additionally, Shur explores various philosophical ideas going as far back as ancient Greek philosophers, with a heavy emphasis on Immanuel Kant’s deontological ethics expressed by Chidi (Manuszak, 2019).

Conceivably, The Good Place addresses one of the most known and overused hypothetical conundrums in ethics; the trolley problem. Just like the trolley problem has become a fixture in ethics classes, the series dedicates ample time to dissect the problem and dramatizing its many variants. At a glance, the trolley problem goes like this; if there was a trolley hurtling towards five maintenance specialists on the track and you were by a switch that could cause the cart to veer onto another track where there was one man, what would you do? (Marioka, 2017).

Some alternative versions of the trolley problem include; would you commit a sex crime on the condition that the other person is going to write a check to have all children vaccinated against malaria? (Rehman & Kozłowska, 2018). As a doctor in a remote village, would you kill one sick person and harvest his organs to save another ten people who were dying for lack of these organs? (Unger, 1992). Despite the implausibility of these scenarios in real life, it is not uncommon to find a whole amount of time dedicated to the discussion. Because of the rarity of such events and their impracticality, it is preposterous to try and use such moral reasoning to real-life problems.

Rennix & Johnson (2017) note that there are many demerits of the trolley problem being used as a facet of philosophical or psychological thought. Aside from turning one into a temporary psychopath, the trolley problem places the individual in a position of forced decision making whereby both possible decisions would have tragic outcomes (Rennix & Robinson, 2017). As Chidi quickly notices, the problem is repulsive because it takes away human agency in decision making by placing the person in a situation where all the decisions are predetermined except for the determination of who has to die. Therefore, the trolley issue is more of who gets to play God and who gets to suffer the consequences of it – a nice parallel with the position of Michael in the series. Furthermore, the question of why things are the way they are is ignored. The decision maker is forced to accept the conditions of the situation without a second thought and make a decision. Basically, by avoiding the question mentioned above, one has deviated from moral and philosophical thought.

Although professor Chidi uses the trolley problem as a very important example of a moralistic philosophical choice, from a critical perspective, there is little about morality in it. Decision-making does not occur in such a vacuum whereby impractical instances are hashed together to produce terrible outcomes from which one has to choose (Rennix & Robinson, 2017). Furthermore, the problem itself is based on a concept that is not morally correct. The aspect of one person having more power over others to the extent of determining which lives are more valuable is ethically wrong. It is somewhat unsettling that an individual’s subjective judgments can be used as the yardstick for whose life has value and who else deserves to die (Thomson, 1976). The question of who deserves to live and who deserves to die should not be the burden of any single human being or group regardless of their position or status.

As Chidi finally explains, the trolley problem and its variants are constructs meant to show how hard moral decisions are (as also noted by Graham, 2017). However, the element of morality that seems to be missing in these constructs is that of self-sacrifice that characterizes ‘doing the right thing’. Being forced into a decision-making situation which is entirely foreign and not of the individual’s making eliminates the aspect of morality. However, when there is the opportunity for self-sacrifice, the picture is moral. It can be argued that the trolley problem is not a good avenue for exploring morality, and watching The Good Place allows viewers to understand this meta perspective on classical dilemmata.

Broverman, A. (2019).  The Good Place might concern itself with big questions, but it teaches us to find pleasure in little moments. The National Post. Retrieved from:  https://nationalpost.com/entertainment/television/the-good-place-might-concern-itself-with-big-questions-but-it-teaches-us-to-find-pleasure-in-little-moments

Dunn, G.A. (2018).  The Good Place and Philosophy: The Good Place, the Bad Place, and Other People. The Blackwell Philosophy and Pop Culture Series. Retrieved from: https://andphilosophy.com/2018/03/23/the-good-place-and-philosophy/

Manuszak, S. (2019). The Moral Philosophy of the Good Place. The Bull & Bear. Retrieved from: http://bullandbearmcgill.com/the-moral-philosophy-of-the-good-place/

Rennix, B. & Johnson, N. (2017). The Trolley Problem Will Tell You Nothing Useful About Morality. Current Affairs Magazine. Retrieved from: https://www.currentaffairs.org/2017/11/the-trolley-problem-will-tell-you-nothing-useful-about-morality

Turner, L. (2019). ‘The Good Place’ has created a heaven and hell perfect for our time. The Washington Post. Retrieved from: https://www.washingtonpost.com/religion/2019/01/24/good-place-has-created-heaven-hell-perfect-our-time/