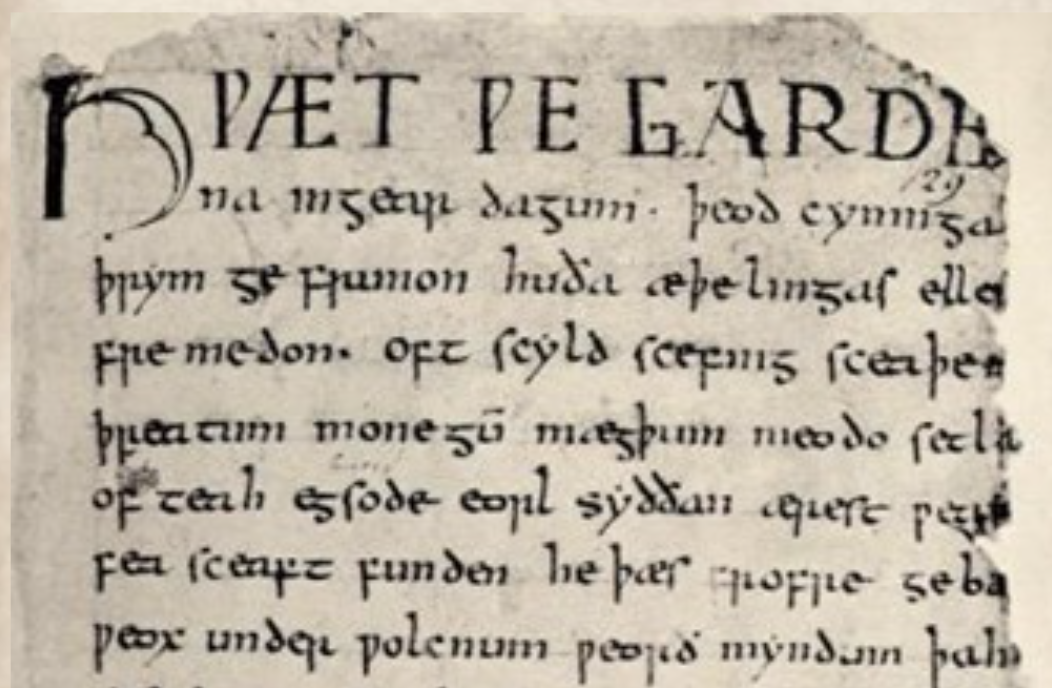 Hwæt – for another most fascinating manuscript I got to see at the British Library was that of Beowulf. And this particular manuscript of Beowulf is also associated with king Alfred the Great (Waugh, 1997). In this short blog post, I explain why the association of Beowulf and Alfred contributes to the myth-making of Alfred as a heroic warrior king.

Just like the Textus Roffensis contributes to the image of Alfred as an intellectual, Beowulf contributes to the intertextual storytelling about Alfred as a hero. As Paul Anthony Booth explains, “for Anglo-Saxonists, no figure symbolizes the heroic more than Beowulf” (Booth: 41). But who was this Beowulf? The classic and prehistoric Anglo-Saxon poem of the same name spells out the character victory against Grendel, explicates tales of his atrocious mother, and displays to replicate his ability and bravery as a daring champion (Andersson, 2016). Nevertheless, triumphs validate the development of destructive defiance. As Niles (1993) postulates, he is a leading actor who adheres to a code that promotes unconquerable determination and courage in the individual. Nevertheless, amid these events, he is strapped to take on the responsibility of a king, a role he is sadly incompetent to take.

Consequently, this divide between both principles is the root of Beowulf’s expedition. Even though Beowulf accepts both positions, there is a sharp division between the characteristics of an effective lead and a real sovereign (Davis, 2016). Hence, the account acts as an account of the gallant philosophy that values conceit and unconventionality by displaying the dangerous propensities that this inspires.

Relatedly, The Anglo-Saxon Chronicle displays much of Alfred’s instruction and actions, particularly his pronouncement to retreat from a devastating Danish armed force in 878 as heroic and wise (Maddicott, 2003). Apart from Alfred’s self-awareness he also demonstrates that he can work with others. Notably, just as Beowulf works with Hrothgar to defeat Grendel, as Hiatt (2009) confers to the writing of Asser in The Life of King Alfred, the king selects to always work with others. Even though he was unlettered like the proud Beowulf all through his formative years, his enthusiasm to pick up from well-informed men rapidly changed him into an astute king (Davis, 2016). Giving to the renowned and justifiable work of Andersson (2016), supplementary pieces of information touching on Alfred’s inclination to collaborate can be found in the foreword of his translation of Gregory’s Pastoral Care (Chance, 2018).

In general Beowulf is a character who shows heroism, self-awareness, and the capacity to work with others. These descriptions of this fictional character are very similar to the portrayal of Alfred the Great. Take for example the depiction of Beowulf as a thane who follows the comitatus.

Alfred of Wessex might have been generous and hospitable as well, but in his rich afterlife, the stress is on his fame as a heroic warrior king. Statues of Alfred in Winchester and Wantage portray him as a great warrior and John Peddie even titled his book “Alfred – Warrior King”. And this image of Alfred as a heroic warrior is reinforced by the association of Alfred with the greatest hero of Anglo-Saxon history: Beowulf.