Posted on December 15, 2022 Posted in fanfic No Comments 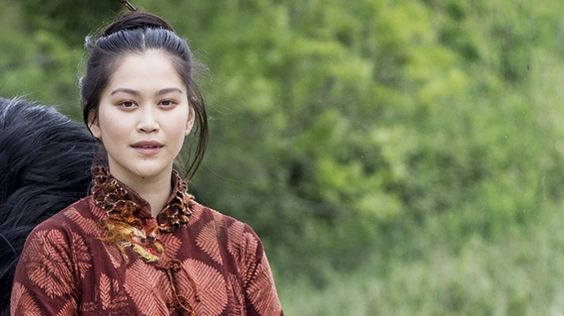 This piece of Alfredian fanfiction by alhena_m35 was originally published via Wattpad and republished with permission of the author.

“A hundred gold coins,” a voice rang out amidst the cacophony and everyone stopped to turn around. When the king spoke, everyone listened. To say it was unusual for King Alfred to turn up at a slave auction would be an understatement. He never went anywhere near the vicinity, but today…Today, he had felt a charge in the air the likes of which he had never experienced before. It captivated him, pulling him forward towards the open ground where commoners gathered. In the middle of the raised platform, a girl donned in dirty rags stood. Seeing the expressions on other people’s faces made a bitter feeling rise in his chest. He was not sure what it was. Rage, perhaps. Disgust? More likely. His retainers and soldiers had followed him there, standing quietly by his side, waiting. Alfred moved forward, gazing straight ahead as he went to the platform. The man standing next to the girl took a few steps back. “My Lord! You need not pay! How dare we take money from you?” his trembling voice called out. Alfred spared him a glance. “You will be paid accordingly.” Turning back to the girl, who looked to be in her twenties (a woman then), he gestured for her to get down from the raised platform. Seemingly understanding it, she hesitated a bit before walking down. “What’s your name?” “英語が話せません.” Alfred knew the girl was not from his country. Her wheat brown skin and fierce eyes spoke stories of a different land. He looked at her for a few seconds longer before turning around. It was time to go back to the castle.

Her name was Yidu. That was the only thing they had managed to find out about her. The first thing he did after returning was to order the servants to clean her up and teach her his language. Alfred stood next to the window now, his gaze on the ever-busy city stretching out in the distance. “Bring her here,” he told the servant who bowed and exited the room. A few minutes later, the door opened and closed. When he turned around, he saw Yidu standing quietly in the center of the room, clad in a flowing gray dress. “Sit.” He gestured towards the chair. Then followed her and sat down on the adjacent chair. A bowl of soup was placed on the table in between, one he had asked to prepare before calling for her. “Eat.” When she made no move and kept looking at him, he grabbed the bowl and brought a spoonful of it to her mouth. Realization dawned on her face and before taking the spoon between her lips, she murmured a few words in her mother tongue. Alfred raised a brow but said nothing. When he filled the spoon with soup again, she reached out to take it from him but he gave her a shake of his head and her hands dropped. Alfred fed her in silence. ~ “This is a bow,” Alfred was teaching her. Three months had passed and now she could decipher most of every day’s words. Alfred insisted on teaching her something new every day, taking her out of the castle and pointing at different things. “It’s short,” she said after a pause. “It is?” he asked in genuine curiosity. She nodded. Yidu took a stick on the ground and bent down to draw what the bows in her homeland looked like. “Like this. We call it kyudo,” Alfred echoed the word as he rubbed his chin in thought. “Interesting. I will ask my soldiers to learn more about this kyudo you speak of.” She got up and gave a small smile. He reached out and took her hand and she let him. They moved forward.

“My butterfly,” he called out and the spoon almost slipped from Yidu’s hand. She felt the urge to check if there was anyone else in the room that Alfred could be talking to but knew it was just them. “Why do you always say those words before a meal?” She had gotten used to his questions regarding her ‘unorthodox’ motions. The same way Alfred asked her about them, she asked him just as many, if not more, questions about his country. “いただきます?” “Yes. That.” “It is to thank God for the meal,” Yidu answered as she placed more roasted meat on Alfred’s plate. She had noticed how he didn’t eat as much as he should and slowly started to make him eat more. If he noticed her ministrations, he didn’t comment on them. “Then, いただきます,” he clapped his hands like she did and then began to eat. Although the word didn’t flow as smoothly off his tongue, the small gesture made warmth rise in her chest.

The blood sparkled a brilliant shade of carmine as it fell down from her hand. The glass shard had been small but human skin was delicate, breaking easily under the sharp edge. Alfred’s hands were instantly on her, making her sit down as he looked at the wound. “Leave the cleanup to servants,” he said with gritted teeth. “You do not need to do such mundane chores.” Yidu rested a hand – the uninjured one – on his shoulder. “I am fine.” “My butterfly, why must you insist on working?” he asked as he cleaned the blood off her hand near a water basin a few minutes later. “It is what I am used to,” she answered honestly. She watched how his hair took a golden hue in the sunlight coming through the window. There was a furrow between his to ease it. “That was your old life. Now, you are free.” brows and she put a finger there “For you, I want to do it,” she said in the quiet and his eyes softened. He remained silent for a long time, long enough that she felt he was not going to say anything. But then, he finally said: “If you insist, my butterfly.”

“Why do you call me that?” she had asked him, one day. Alfred tucked a lock of her hair behind her ear and looked at her. “My butterfly?” She hummed and the corners of his lips turned upwar ds. He was amused at her query, she could tell. “Because you’re everything to me that a butterfly represents.” “ Which is?” He closed his eyes and she noticed how long his lashes were. They cast shadows on his cheeks and gave the lightest flutter like the soft movement of flower petals when wind caressed them. “Beauty. Joy.” He opened his eyes and they pierced her soul with their intensity. “Rebirth.” She felt heat rise to her cheeks on hearing those words. From then on, the words took a different meaning for her and whenever he called her ‘my butterfly’, she’d have a smile on her face.