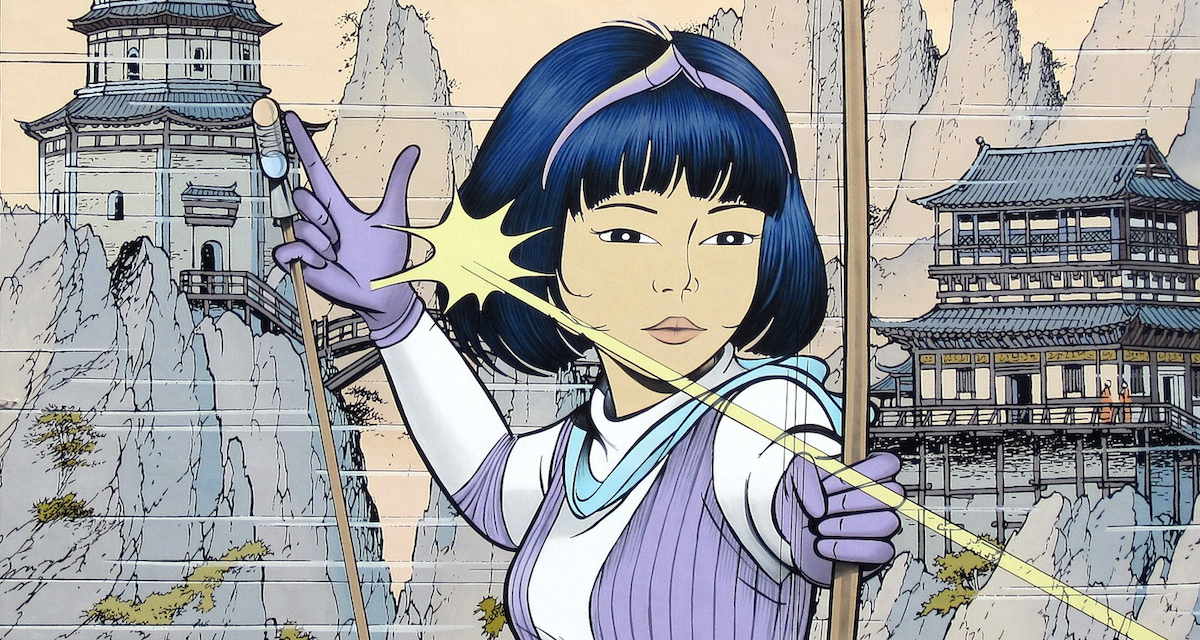 Maybe some of you already recognized her in the Japanese looking character I use in my budo drawings? If not, I would like to introduce you to my childhood heroine: Yoko Tsuno. This post was originally written for GeekGirlAuthority.

As a child, initially, I didn’t really care for comics. Sure, Donald Duck was funny – as I liked this puns & wordplays – but he had little to nothing to do with my own life, feelings or future. It had never occurred to me that I could find an idol in a comic book – until it happened. On a rainy day, when my father needed my… euh… I mean his 386 PC, I looked through his comic books and accidentally stumbled upon Yoko Tsuno by Roger Leloup (The Adventures of Tintin). And my mind was blown.

Since then, all bets were off, and every birthday, Sinterklaas or Christmas, I asked for an album with Yoko Tsuno. I drew Yoko in my diary notebooks and knitted a doll in her image. One of the first albums I read was “the Dragon of Hong Kong” – in which the dragon turned out to be a robot dragon and that idea also massively inspired me (as a teenager, I even created my own mechanical dragon). Yoko Tsuno was nothing less than a revelation to me, as she represented so many of the things I (unconsciously) wanted for myself. In the words of French computer scientist Isabelle Collet: “I could not identify myself with any other girl, with any famous woman. No writer, no scientist in my landscape, no heroine of a novel that makes me envy, especially in science fiction! Fortunately, there was Yoko Tsuno.”

Yoko is beautiful, courageous, super smart and bold to the point of temerarious. Not only can she fly a plane and a spaceship, she also knows different languages such as Dutch, German, French, Japanese and Chinese. She is a Buddhist and a skilled electrical engineer, practices scuba diving as well as martial arts and is an adept archer. The adventures that Yoko experiences are always exciting and surprising, because they are so vastly different every time. Sometimes on a haunted castle, sometimes on a caribbean island, sometimes roughly two million light years away, on planet Vinea – as a detective and a crime solver, Yoko discovers many interesting cultures, as well as robots, aliens, space and time travel, and suspended animation.

Looking back, I can see why the first geek girl I encountered made such an impact on me. Yoko is a misfit who effortlessly makes friends as she moves between all sorts of cultures (from Europe, China and Japan, but also from the past and even extraterrestrial). But no matter where her exploits take her, she always remains faithful to herself and her values. And although Yoko is very beautiful, her representation is never sexualized. Thus, for me, she embodied the ultimate combination of alpha and beta; and the perfect cooperation of head, heart and body. Moreover, through my imaginary travels with Yoko, I encountered many areas of interest that would become important to me later on in life. My first encounter with German Romanticism, for example, was in the form of the castles, boat trips on the Rhine, the imagery of Rothenburg ob der Tauber and everything surrounding Das Rheingold, which was all represented by Yoko’s friend, the German organist Ingrid Hallberg.

But Yoko is not only significant to me personally, she also symbolizes (cyber) feminism in a broader context. Although science fiction had been a popular genre in Belgian comics for quite some time (Spirou/Robbedoes imported American comics with SF elements, such as Superman and Brick Bradford from the late 1930s onwards, and Belgian originals Suske & Wiske were on the moon in 1948, followed by Tintin in 1950), these stories had never featured a female protagonist.

The Catholic Belgian editors/publishers and the French censorship committee prohibited female forms until well in the 1960’s. By the end of that decade, the official censorship committee disappeared, but the comic book editors still held on to their prejudices. And maybe, in retrospect, we geek girls should thank them for doing so. For example, take the third Yoko Tsuno album: Vulcan’s Forge. Originally, Leloup wrote this screenplay for this album for The Adventures of Tintin when he was still an assistant at Hergé. Hergé, however, rejected it because he had problems with the major role of female characters in the story. Later Leloup reworked the screenplay and now we have an awesome Yoko Tsuno comic book.

Not dictated by traditional representations of gender, the character of Yoko Tsuno marks a tipping point in the history of comic books. As one of the first European comic book heroines, alongside Barbarella and Natacha, Yoko Tsuno got her own series (in the early 1970s).  Averse to the traditional comic book roles for women, in her series, Yoko herself is the main character: the adventurer, the scientist, the crime solver and …an inspiration for many generations of geek girls to come!