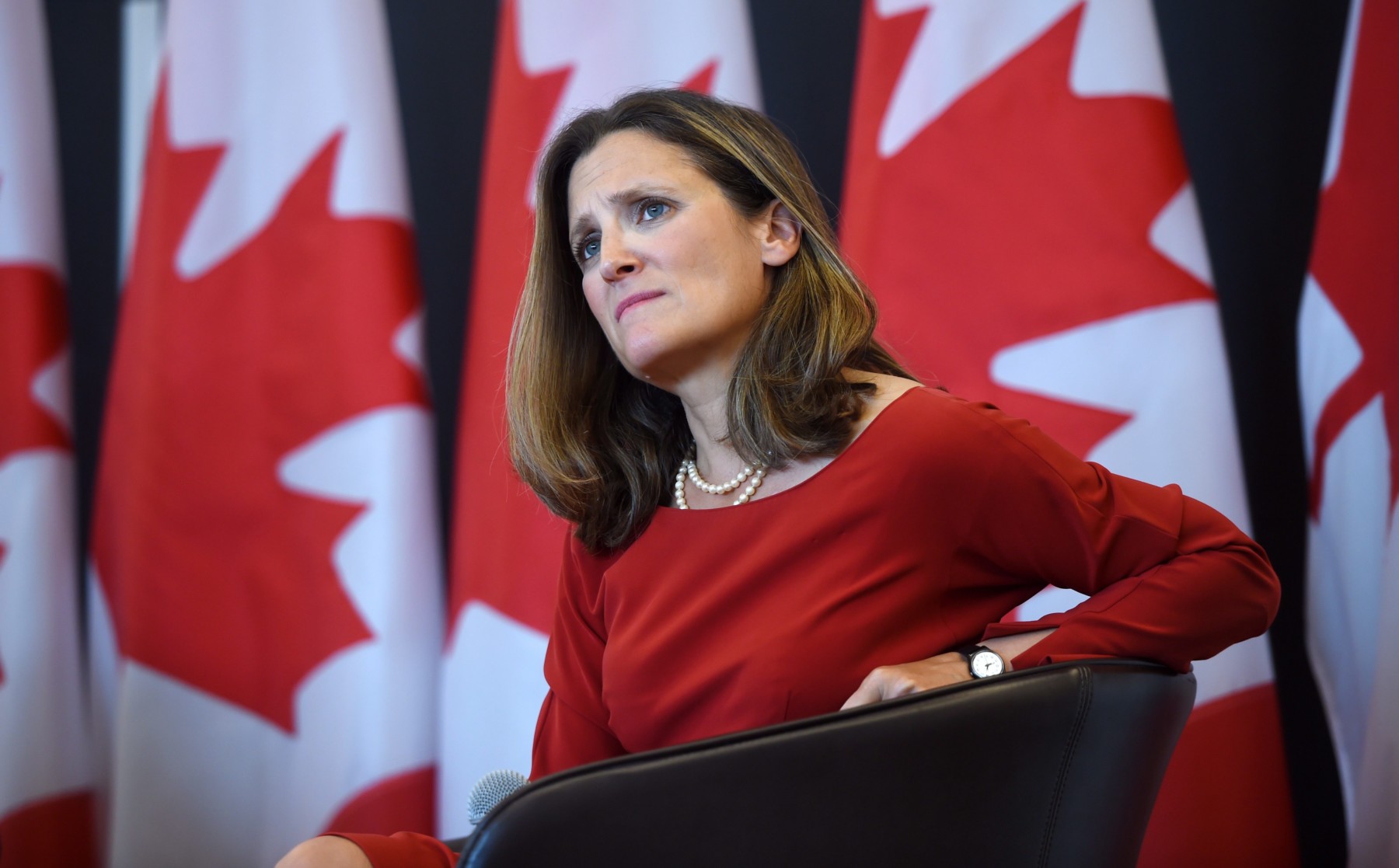 Foreign Affairs Minister Chrystia Freeland discusses modernizing NAFTA at public forum at the University of Ottawa in Ottawa on Monday, Aug. 14, 2017. THE CANADIAN PRESS/Sean Kilpatrick
This morning, I was chatting with a friend about how we feel that most policies fail: because they do not consider the uniqueness of women’s and girls’ issues and needs. My friend recently spent some time in Canada, and told me about Canadian politics, in particular about their foreign policy. I am not a political scientist (and have no ambitions in that direction either), but much of what I learned about Canada this morning seems to resonate with the feminist framework that I use for the Cyborg Mermaid. I decided to write a blog about these connections, to generate some discussion and perhaps inspire soms real political scientists.

Recent research indicates that transformative humanitarian action aims at rebalancing existing gender power relations and drawing attention to the unmet needs and demands of women and girls (Johnston, 2018). Evidently, the intersection between gender and policy formulation and implementation cannot be denied. More importantly, it should be stated that gender is a critical aspect in the formulation of policies because policies have different impacts on men, women, boys and girls.

In light of the aforementioned observations, Canada has embraced a feminist foreign policy which is hinged on key Canadian values; gender equality, the empowerment of women and girls and the promotion and protection of human rights (Sjolande, 2005). The Canadian foreign minister; Chrystia Freeland has been emphatic on the notion that women’s rights are human rights hence women’s rights are at the core of Canada’s foreign policy. On the whole, Canada’s feminist policy aims at addressing the challenges faced by women within the foreign affairs bureaucracy, rectifying gender-blind policies, upholding key Canadian values such as gender equality and also encouraging gender mainstreaming initiatives at regional and international levels. Even though, the adopted foreign policy is far from perfect, it is subject to improvement.

While expounding on gender and Canada’s Foreign Policy (CFP), an assessment of women’s status in CFP in the past years shall be critical. Notably, women’s role and contribution towards the Canadian foreign policy has often been neglected (Smith & Cornut, 2016). However, the situation is changing fast as women continue to break the glass ceiling by actively participating in public spheres and advocating for policy as an instrument in bettering women’s lives. In addition to the assessment of women’s status, it is important to examine what the current foreign policy looks like in practice and implementation. Fundamentally, there is the challenge of applying a gender lens in areas such as diplomacy, peace keeping and trade (Brown & Swiss, 2017). Experts indicate that the challenge towards the absolute adoption of a gendered foreign policy may begin at the rudimentary stages. The primary challenge herein is the integration of gender aspects not only in policy formulation, programming, development and implementation, but also among the country’s representatives. Another anticipated challenge for Canada’s foreign policy is the unwillingness of foreign relations to adopt similar principles because they are unwanted or unfamiliar. On the whole, Canada’s advancement of gendered foreign policies and her willingness to stand by these policies in the face of adversity is critical to the discussion on the sustainability of the current foreign policy.

In the spirit of upholding key Canadian values and encouraging gender mainstreaming, the women’s peace and security agenda is at the heart of Canada’s foreign policy. Notably, Canada has to exert a lot of effort and resources to address issues of missing women and mistreatment of indigenous women and girls and also rising incidences of sexual assault and harassment. Furthermore, the implementation of the feminist foreign policy in the security and defense sector should be examined. This is because there is a significant disparity in women’s representation in the armed forces. Furthermore, research should be conducted on the appropriate gender measures and indicators that can be used in monitoring and evaluation of policy implementation within the context of gender affairs (Ho, 2018). For instance; gender budgeting, women’s participation in peace negotiations and the reviewing of development assistance goals can serve as positive indicators towards the fulfilment of Canada’s foreign policy.

The crux of the present government’s foreign policy lies in international assistance. The current president of Canada Justin Trudeau, has voiced a commitment to ensuring gender equality is at the center of poverty eradication attempts and peace-building efforts. Moreover, the commitment towards challenging discrimination faced by women and girls across the globe has been included in China’ foreign policy. Since the present foreign policy is a work in progress, 15% of the country’s bilateral international development assistance has been allocated for programs that champion for women’s rights and advocate for gender equality (Brown & Swiss, 2017). The ultimate aim is to improve the quality of life lived by girls and to combat issues such as gender-based violence and sexual harassment. In spite of clear pronunciation of these commitments, Canada has faced heavy criticism concerning her involvement in the sale and distribution of arms in Saudi Arabia and Philippines. On the whole, it is evident that Canada has a heavy task of staying committed to achieving gender equality.

Theoretical frameworks that can be used to analyze Canada’s gendered foreign policy include Marxist Social Conflict theory and Feminism theory. According to social conflict theory by Karl Marx, inequality is often the source of conflict (Bartos & Wehr, 2002). Competition for scarce resources and opportunities as well as structural inequalities lead to interactions which are characterized by conflict and not consensus. Marx’s conflict theory can be used to examine Canada’s situation before the introduction of the new feminist policy. Before Canada’s gendered foreign policy was introduced, women were highly underrepresented in many spheres and many still faced discrimination. Men, who are considered to belong to a more powerful class, utilized their position and power so as to maximize benefits and opportunities conferred unto them and exploit the minority groups. Canada’s current foreign policy acknowledges that there are significant gender disparities that women face particularly in the context of foreign affairs.  According to the theory in focus, conflict is an engine of change and inequality breeds conflict. Because of conflict and clashes between different classes and categories of people in the society, revolutions occur in accordance to the demands of the society leading to society’s needs being met.

Feminist theory is also critical in examining the current foreign affairs policy in Canada. Notably, feminism is hinged on advocating for equal opportunities, rights and outcomes for women as men. The concept of feminism is hinged on eradication of sexist and discriminatory social practices which reinforce male supremacy and produce female oppression (Gimenez, 1975). Contrary to common misconception, feminism theory does not solely focus on the promotion and empowerment of women, but rather, it is an all-round approach towards the achievement of equality and justice for all persons. This is because the main areas of focus in feminism include gender roles and stereotypes, gender division of labor, structural and economic inequality and oppression. In the light of the above findings, feminism is integral in explaining the concepts that imbue Canada’s foreign affairs policy.

Summing up, Canada has followed in Sweden’s lead by embracing a feminist foreign policy. The policy, which was released in 2017, is hinged on the core values of the present Canadian government which include; gender equality, the empowerment of women and girls and the promotion and protection of human rights. Evidently, there is need to check and address various challenges that may hinder the successful realization of these policies. Furthermore, it is essential to create gender-responsive indicators that can be used in the monitoring and evaluation of the policy in question. Notably, Canada has a long way to go since there are major gender disparities still being witnessed in the country particularly in the armed forces sector. From a theoretical standpoint, feminism theory and social conflict theory can be used to expound on Canada’s foreign policy.

The Typewriter
'You are so inspiring, I mean, for an autist!'
A review of What a Genderful World!