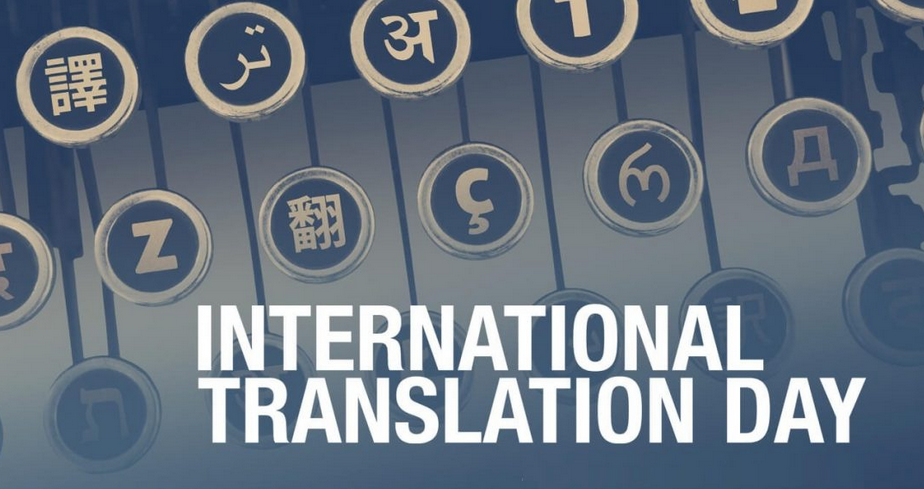 Every year on September 30, it is the feast of St. Jerome (347–420), a priest, confessor, theologian, historian and: Bible translator. He is even considered to be the first to have translated the Bible from Hebrew to Latin. Therefore, the International Federation of Translators chose this day to be celebrated as International Translation Day.

Translating and translations have always been important to me. This has mostly to do with the fun of a nice puzzle and the relevance of opening doors to new worlds (for myself and others). And this interest found its way into my scholarly work as well. As a musicologist, I often looked at the relationships between lyrics and music through the lens of a word-by-word translation. As a Slavist, my focus was on literary translations, with much reading between the lines. And now, in wrapping up the Phd, I find that somewhere in this tension between literary and literal translations it’s often where the magic happens.

While working on one of my side projects, I recently encountered an amazing piece of work: Nicole Discenza’s “The King’s English” (2005). In this book, Discenza has made an extensive study of the way King Alfred of Wessex (849-899) works in translation. As she explains, the choices the king made when translating depict a real ‘translation strategy’. Alfred’s authority as the king didn’t automatically grant him the authority of a philosopher/translator/explanator, therefore he made use of certain techniques which helped to provide his translations with this authority. One of his methods was to show emphatically that he controlled the nuances of Latin and had mastery over the texts. He achieved this by adding extra contextual information and explaining the content in an easy-to-grasp way for the ignorant reader. His translations are therefore sometimes more like re-writings, but that did not matter, after all, most of the Old English readers would probably never study the Latin originals and would have been forced to rely on the translation. Moreover, by the choices he made, he added an extra layer to the text, for scholars who did understand Latin. Thus, we present-day scholars can explore and interpret the thoughts and opinions of Alfred the Great in his own voice.

Since Alfred’s time, the life of a translator has gotten much easier. Translators can work from the comfort of their home and in their own time, having all the sources the need hidden under a tab on their screen. Since three decades down the line, the industry witnesses a revolution that would forever change the way we translate. When the PC and Internet were invented (in the 70s and 80s respectively), translators became able to send and receive documents electronically and that opened up a range of new possibilities. Decades ago, every single project would be hand- or typewritten, clients would have to find their translators locally and translators would be depending on the dictionary at hand. But with the advancement of Google, one no longer needs to take a trip down to the library for that one lacking word, as with a connected smartphone, you have the world in your hand.

There is also another development going on in the translation industry, deriving from this technology: machine translation. Popular programs, like Microsoft Translator and Google Translate, are based on SMT or “statistical machine translation”. This means that they gather as much text as they can find that seems to be parallel between two languages, and then they crunch their data to find the likelihood that something in Language A corresponds to something in Language B. As this obviously does not work between languages that have no parallel sets, the developers had to be inventive. Initially, translating between two relatively small languages went through English, which caused many strange mistakes. Since 2016, Google Translate had made significant advancements, enabled by Deep Learning.

At a conference, I overheard translators talking about this in the context of worrying about being replaced by computers. A fear that lives in many professions, but one I do not share, because I often feel that computer-translations lack “something”. Yes, a robot translation might be more accurate than a pure human translation, but frequently, it lacks empathy and fantasy. The first example that comes to my mind is the Dutch translation of Tolkien’s “Lord of the Rings” (1954). This work has been translated into dozens of languages, a delicate task, as Tolkien (being an expert in Germanic philology himself) scrutinized those that were under preparation during his lifetime.

When I was about 16 years old, I read the English original, next to Max Schuchart’s 1957 Dutch translation, called “In de ban van de Ring”. The Dutch title is a puzzle in itself, as “in the ban van” can mean many things, like “been seduced by [witchcraft]”, “under the spell of”, “being infatuated with”, “being captivated by”, “being obsessed with”, “having [something] on his/her mind” and “idolizing”, all of which is true for different characters in the books. And with this title, the stage is set. In his broody Dutch, Schuchart managed to incorporate many associations and nuances that would not have reached me, had I limited myself to the original work only. Much of this is due to the altering of the pet names. In the English version, Aragorn is introduced with the name Strider, and in Dutch, that became “Stapper” – someone who steps and takes steps. Not only is Stapper the literal translation of the Quenya name Telcontar, to me it adds another layer as it also sounds more decisive, determined and firm. The same argument can be made for the northern wandering people of Eriador. Tolkien called them the Rangers, and Schuchart renamed them “Dolers”. This name derived from the Dutch verb “dolen”, which means to wander, to roam, but also to ramble, to err, to meander and to gad about. Therefore, as a Dutch reader, I was immediately concerned that Aragorn might be or get lost.

All the translations and synonyms in the paragraph above where found and/or retrieved quickly. The book by Discenza, the writings of King Alfred, the works of Tolkien and the translation by Schuchart – I have them all under the tips of my fingers, thanks to modern technology. But they needed the human emotions to exist in this world in the first place. Therefore I would say that I vote for a cyborg as a translator: an empathic human, full of imagination, who creatively uses all the technical tools that are available. As in my opinion, the best translations are those that use the best of both worlds, literary *and* literal.