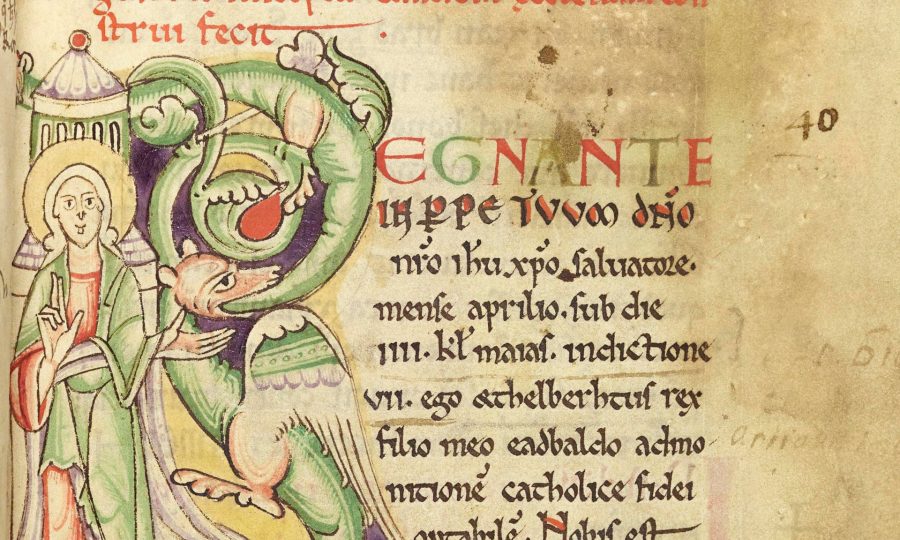 When I heard that this year’s Domcantorij tour would lead us to Rochester, I got very excited. Not only would I have the change to improve myself as a chorister and deepen the relationships with my fellow singers, but the trip would also allow me to connect to King Alfred in a new way. This blog post is a reflection of my findings and the first of a series of four.

The first connection I found was in the church itself, namely via the Textus Roffensis, a manuscript I had already met at the British Library (in their exhibition Anglo-Saxon Kingdoms: Art, Word, War). Around AD 600, King Æthelberht of Kent promulgated a code of about 90 laws defining crimes and punishments. The code was regarded as sufficiently significant that in the twelfth century (over 500 years later) they were written down in this “Book of [the church of] Rochester”. Æthelberht’s laws are thought to be both the earliest law code of any kind in any Germanic language and their wording the earliest surviving document in the English language. Although the only surviving copy is the Textus I saw in London and Rochester, the laws are referred to by both Bede and: Alfred the Great. It felt amazing to read some of the same pages that Alfred himself has read, like travelling through time, via a wormhole or so. 😉

In AD 842 Rochester was sacked by invading Danes and was under siege again from them in AD 884. This time the town held out until relieved by King Alfred (Stenton, 1971). Around 871, King Alfred came to gain leadership of a kingdom that was under constant attack from the Vikings (Reuter, 2017). Rochester was under constant subjugation. Nonetheless, Alfred incessantly fought the Vikings until his troops landed him triumph in 878 (Tennyson, 2015). Markedly, in 878, King Alfred won the Battle of Edington and ratified an agreement with Vikings to guarantee the creation of the reputable Danelaw situated in the northern parts of England.  Apart from that, the king correspondingly directed Guthrum’s change to Christianity from being a pagan (Brooks, 2017). In summary, King Alfred staged a good defence against all the attempts made by the Vikings and this earned him his reputation to be a renowned ruler in England.

With the help of these writings (book and blog) by Dr Paul Kelly, I walked through Rochester in Alfred’s footsteps. The position of the Roman bridge was not hard to imagine, considering the slightly altered stream of the river (I guess most people would choose to build their bridge over the smallest part of the water). Based on the markings within the city (such as the plague on the wall that marks the South Gate in the Roman walls and the outline on the ground of the East Gate), I could draw of map of the Roman fortress, just as I can do in my home city of Utrecht (the Netherlands). But guessing where the Viking fortification might have been was a harder task. The only things we know are that the Danes entered at Medway to attack Rochester and encamped opposite the entrance to the town, where they constructed ramparts and ditches to fortify their position. Until Alfred came. Although a National Grid Reference is established for the Siege of Rochester, its precise location remains unknown, the NGR (with number TQ74247 68501) is an approximation based on the location of the old town, cathedral and the original defence walls.

Details pertaining to King Alfred’s life in Rochester through the ninth century are perfectly described by an academician and monk known as Asser in Asser, De rebus gestis Ælfredi regis (Tennyson, 2015). With around half of his manuscript being a translation of the Anglo-Saxon Chronicle between 851 and 887, Asser postulates the life of king who promoted learning and religion (Gould, 2017). Nevertheless, in his manuscript, Asser mentions nothing on Alfred’s battles. For that, while at Kent, Alfred relished relative relief up until one more wave of bouts in between the year 892 and 896 (Abbott, 2018). Over the four-year period, the king gained popularity because of victories, organization of the armed forces, and the development of West Saxon defences (Campbell, 2017). For Kent, Alfred was also known for his societal rubrics and cultivation of education. Notably, for Rochester, the King brought researchers from Mercia (Brooks, 2017). His efforts enabled the importation of concepts from the Carolingian Renaissance and translation (Abbott, 2018).

In summary, in Rochester, I learned more about the circumstances and forces that shaped Alfred’s reputation. All sources who mention his connections with Rochester describe the king as an educated and compassionate gentleman, an courteous and level-headed character. According to tradition, it was Alfred himself who fortified teaching, suggesting that primary edification be directed in English afore Latin and refining the legal system, military construction and his society’s quality of life. Although there is of course hardly any tangible evidence of Alfred’s presence, there is much in Rochester that resonates with him. Alfred’s legacy offers the researcher the opportunity to test ideas about Alfred and his reign on various sources. It was interesting to explore those connections and to read the Textus Roffensis in the church where it belongs, instead of in a museum setting. Last but not least, my visit confirmed that for me, the best way for me to get to know Alfred is via texts. Those silent witnesses of a turbulent period make the echo of Alfred’s reign almost audible.