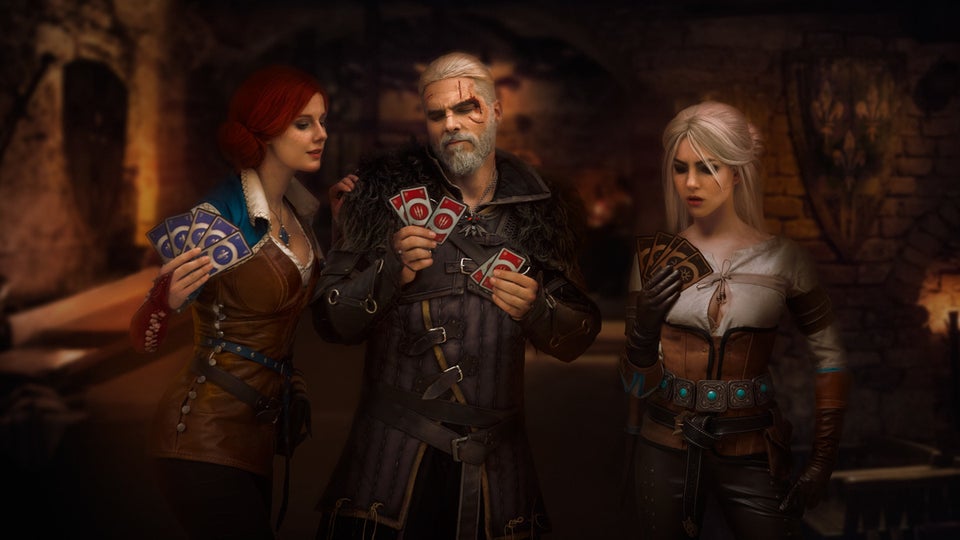 As you can imagine, the transmedial storytelling around Wiedźmin [The Witcher] combines many of my interests. Therefore, I wish to contribute to this phenomenon by means of a new translation (from Polish to English) of the short stories from the collection Ostatnie życzenie (The Last Wish) by Andrzej Sapkowski. This is the fifth story – with many thanks to my teacher Sławomir! Please let me know if you have any comments or suggestions.

Geralt looked out the manor’s window for the last time. Twilight fell quickly. Behind the lake, vague lights of Wyzima flickered. Around the manor house there was an emptiness – a strip of nomansland, which the city had separated from the dangerous place in six years, leaving nothing but a few ruins, rotten beams and remnants of a toothed spur, which you can see did not pay to undress and carry. The king himself moved his residence the farthest away, to the opposite end of the estate – the cracked table of his new palace was blackened in the distance against the background of the grenading sky.

The witcher returned to the dusty table, where in one of the empty, ransacked chambers he was preparing in an unhurried, calm and careful manner. He knew he had a lot of time. The striga would not leave the crypt before midnight.

In front of him on the table he had a small, iron plated box. He opened it. Inside, tight, in compartments lined with dry grass, there were dark glass bottles. The witcher took out three.

From the floor, he took an oblong pack, thickly wrapped in sheepskins and wrapped in a thong. He unfolded it, brought out a sword with a decorative handle, in a black, shiny scabbard covered with rows of runic signs and symbols. He uncovered the blade, which shone with a clear, mirror-like glow. The wedge was of pure silver.

Geralt whispered the formula, drank the contents of the two flacons one after the other, putting his left hand on the head of the sword after each sip. Then, wrapping himself tightly in his black coat, he sat down. On the floor. There was no chair in the chamber. As in the whole manor house.

He sat still, with his eyes closed. His breath, initially even, suddenly became accelerated, snarky, restless. And then he stopped completely. The mixture, with the help of which the witcher subjected the work of all organs of the body to full control, consisted mainly of hellebore, datura, hawthorn and spurges. The other ingredients had no names in any human language. For a man who wasn’t like Geralt, used to it since he was a child, it would be a deadly poison.

The witcher turned his head violently. His hearing, now sharpened beyond all measure, easily fished out of silence the rustling of his steps in the nettle-covered courtyard. It couldn’t have been the striga. It was too bright. Geralt put his sword on his back, hid his bundle in the hearth of the ruined fireplace, and he ran down the stairs, quiet like a bat.

It was still bright enough in the courtyard for the coming man to see the witcher’s face. The man – it was Ostrit – moved back violently, an involuntary grimace of horror and disgust bent his lips. The witcher smiled crooked – he knew what he looked like. After drinking a mixture of nightshade, wolf’s bane and eyewort, his face takes on the colour of chalk, and his pupils occupy entire irises. But the mixture allows you to see in the deepest darkness, and that’s what Geralt meant.

Ostrit quickly got a grip on himself.

“You look like you’re already dead, sorcerer. Probably out of fear. Don’t be afraid. I bring you a pardon.”

“Can’t you hear what I said, Quack from Rivia? You’re saved. And rich…” Ostrit weighed a big pannier in his hand and threw it under Geralt’s feet. “A thousand oren. Take it. Get on your horse and get out of here!”

The Rivian was still silent.

“Stop eyeballing me!” Ostrit raised his voice. “And don’t waste my time. I’m not going to stand here until midnight. Don’t you understand? I don’t want you to do charms. No, don’t think you guessed. I’m not siding with Velerad and Segelin. I don’t want you to kill her. You just gotta get out. I want everything to stay the same.”

The witcher hadn’t moved. He didn’t want Ostrit to know how fast his movements and reactions are accelerated right now. It was getting dark quickly. It was all the more advantageous that even the twilight was too bright for his dilated pupils.

“And why should this, sir, all stay the same?” – he asked, trying to speak the words slowly.

“And this…” Ostrit proudly lifted his head, “shouldn’t be your goddamn business.”

“Will it be easier to remove Foltest from the throne if the striga bothers people even more?”

“If the noblemen and mongrels get fed up with the royal madness, right? I was coming to you through Redania, through Novigrad. There’s a lot of talk there about the fact that some people in Wyzima look to King Vizimir as a saviour and a true monarch. But I don’t care about politics, Mr Ostrit, or the succession of thrones, or the palace overthrow. I am here to do the work. You’ve never heard of a sense of duty and simple honesty? About professional ethics?”

“Be careful who you talk to, vagrant!”, shouted Ostrit furiously, putting his hand on the sword handle. “I’ve had enough of this. I’m not used to talking to anyone! Look at him, ethics, codes, morals?! Who? A robber who barely arrived, murdered people? Who bowed in front of Foltest and haggled behind his back with Velerad like a hired thug? And you dare to mess with the head, bollard? Pretend to be the Know-all? Mage? A sorcerer? You filthy witcher! Get out of here before I strike you with the back of my hand!”

The Witcher didn’t even twitch, he calmly stood still.- You’re the one who’s going to get out of here, Mr Ostrit. – It’s getting dark. Ostrit took a step back, he got his sword.- You wanted it, sorcerer. I’ll kill you. Your tricks won’t help you. I have a turtle stone with me.

Geralt smiled. The opinion about the power of the turtle stone was as common as it was wrong. But the Witcher didn’t think about losing his strength for the spells or exposing the silver wedge to Ostrit’s blade. He dived under a grinding blade and a fist, with the silver studs of the cuff, he hit the wielder on the temple.

+ Robyn aka DxTURA wrote this awesome fanfic in which The Witcher meets King Alfred, for which he used my translation of the first story as well as my own fanfic about King Alfred.
+ The Witcher is also present in Nvilia’s piece of parent fiction about the Gummi Bears and the Talking Tree.