In Oceanopolis, I encountered a beautiful and intriguing mermaid. It was an artefact of Inuit art – goddess Sedna. Touched by the small statue and the fascinating myth behind it, I would like to share the story of Sedna with you, by means of some creative writing on my blog.

In the arctic, it’s not uncommon for young women to live at home for quite some time. As such, no one is surprised to find that Sedna still lives with her parents. They aren’t surprised to see her help with the chores, making dinner, pulling in fish – she is a strong young woman, after all.
Every morning, her father goes out to hunt. Every evening, he comes back with seals or caribou or small, lean sea birds. Clad in heavy furs, Sedna helps her mother prepare food. They eat together, huddled around the fire, and for a time, all is well.
But, as is the case with every life and every story, that peace couldn’t hope to last forever. It isn’t long before men begin showing up, asking for Sedna’s hand in marriage. Uninterested in changing her life, she turns them down, one by one, each and every time.
“Please,” begs her father. “Pick someone! It will do you well, marrying a hunter.”
“Please,” begs her mother. “Pick someone! It will do you well, marrying a boat builder!”
But each time, Sedna turns them away, for she has no interest in marriage and even less interest in marry outside of love.
One day, in late winter, a man name Kuk comes calling. He takes Senda by the hand and promises, “I’ll always provide for you, Sedna. You will never want for food or furs. You will never want for pots or tools or flames to keep you warm at night.”
He comes back, day after day, until Sedna finally says yes.
And for a time, they are happy.

Sedna and Kuk move far, far away. They settle down on an island. It’s here that Kuk tells her the truth. “I’m no man, but a bird.”
“A bird?”
“A bird. I knew that, were you to hear the truth at the start, you would never marry me.”
“Of course I wouldn’t,” says Sedna, furious. “I would never have agreed to marry a bird!”
“But you did,” says Kuk, trying to soothe his new wife. “We are wed. Surely, we should just make the best of it?”
Sedna sighs, defeated. She knows, in her heart of hearts, that Kuk is right. And so, for a time, she tries. But Kuk, he’s not a good hunter. Often, Sedna goes to bed cold and hungry. It’s not until Sedna’s father comes to visit that anything changes.
He takes one look at his thin, sad daughter and decides that this will not do!
In a fit of rage, Sedna’s father kills Kuk. Then, he catches his daughter by the hand and pulls her towards his kayak. “We’ll go home,” he says. “And all will be well!”
“I’ve missed you,” says Sedna. She helps her father row away from the island.
It’s not long before shadows cover the kayak, as birds fly over head. Friends of Kuk, already seeking vengeance for his death! There are so many birds, flapping their wings so hard, that they brew up a large storm! Thick black clouds cover the sky. Massive waves crash against the kayak.
“Be careful,” shouts Sedna. Icy water is being splashed into the boat, leaving them both chilled. A particularly large wave nearly sends the kayak tilting over sideways.
Her father looks at her, face twisted with fear. “I’m so sorry, Sedna!”
“Sorry? Father, what – “
He slams his hands into her shoulders, pushing her overboard.
Sedna screams. She manages to hook a hand on the edge of the boat. The birds keep the storm going. Cold water splashes into the boat. Terrified at the thought of death, Sedna’s father pulls a buck knife from his hip.
“I’m sorry,” he shouts, even as he cuts off Sedna’s fingers, one by one by one. As soon as Sedna’s screams are swallowed by the water, the storm stops. She sinks down, deeper into the ocean. Around her, whales, seals, fish and walruses bloom to life from the cut lost joints of her fingers.
They push against Sedna, guiding her soul away from her lost, dead body. These creatures take her soul, and they crown it – a goddess, a mermaid, the queen of the sea floor! Though her life ended in fear and pain, her new eternity is one of a lavish, guiding sort.
Sedna is now the leader to all sea creatures and animals. The Inuit who depend on these creatures want to develop a good relationship with Sedna, so that she will keep on allowing her animals available for hunters to hunt them. 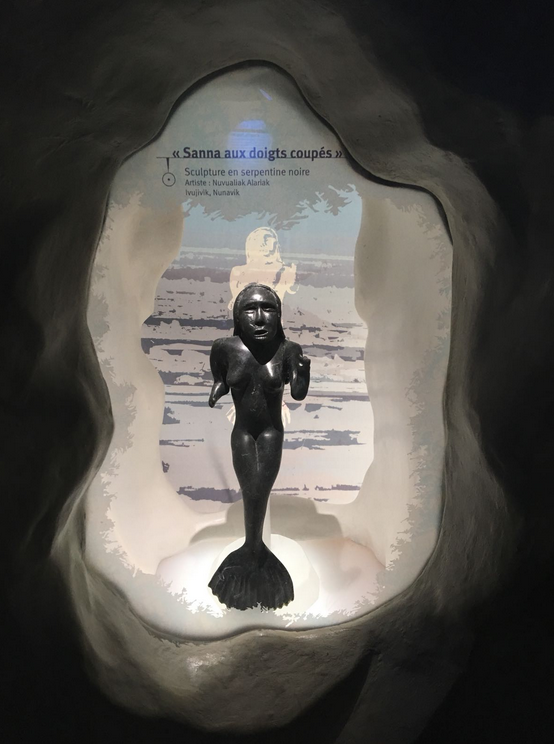 Above is a picture I took of the small statue of Sedna that I saw in Oceanopolis. It was made by Inuit artist Nuvualiak Alariak. The banner on top of this blog posts features an image made by Antony Galbraith. More about this fascinating myth can be found in these books:

With many thanks to John for correcting my English. 🙂