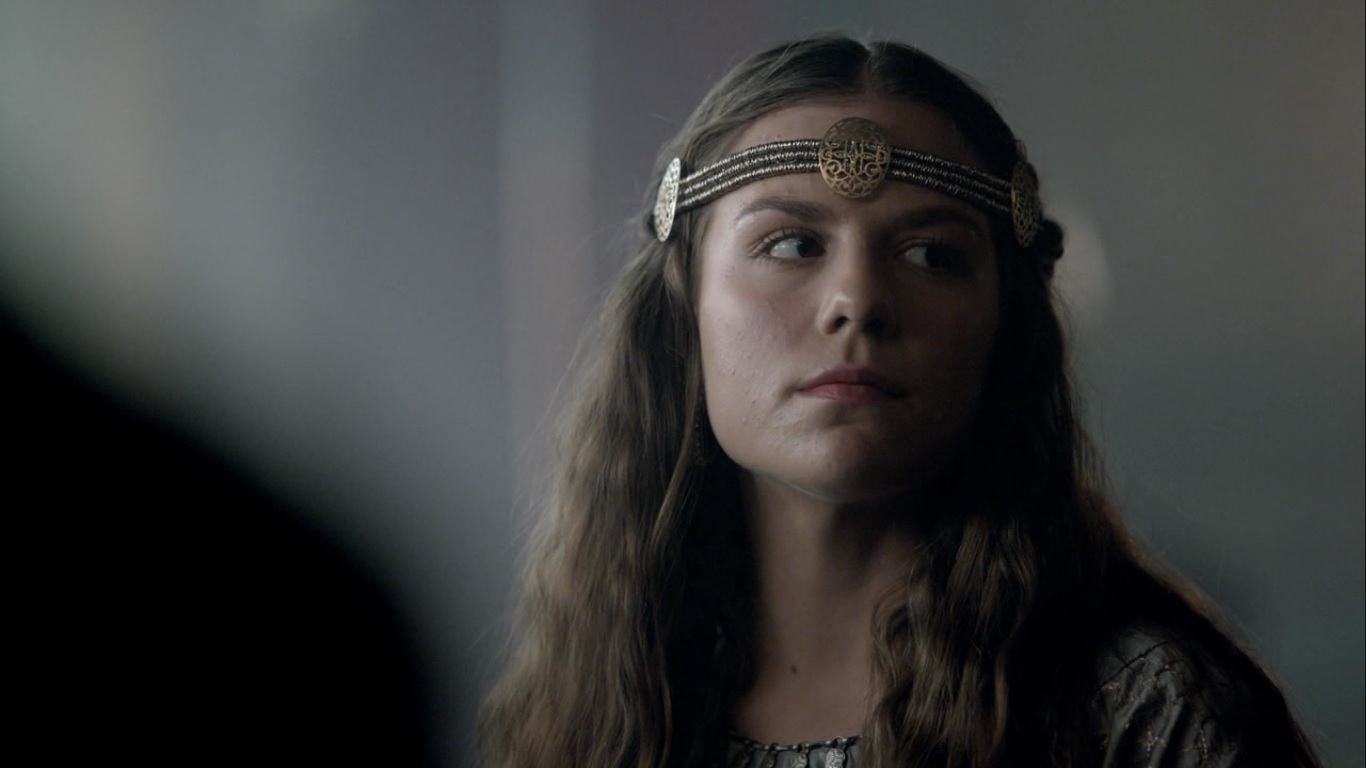 Special interests are one of the most common characteristics of people with autism*, and in my experience, they often come as a surprise. While watching Netflix’ series Vikings to examine the portrayal of King Alfred, a new “fixation” stroke me like lightning. Since her first appearance in Vikings, I became utterly obsessed with fascinated by princess Gisla. So, I did as I always do – googling & reading – and below are the results. An abridged version of this post is also published in the Ancient History Encyclopedia.

… [Rollo] put his hands between the hands of the king, which neither his father, nor his grandfather, nor his great-grandfather had done for any man. And so the king gave his daughter, Gisla by name, to be the wife of that same duke…

In his Historia Normannorum (written between 996 and 1015), the Norman historian Dudo de Saint Quentin (born around 965, died before 1043) introduces us to a Francian princess, by the name of Gisela or Gisla (an Old German word meaning “to pledge”, the French equivalent would be Gisèle). The princess was given away to this “Rollo”, whose  Old Norse name probably was Hrólfr. Dudo also grants the title of “duke” to this famous Viking warrior, even though the title duke (dux) did not come into common usage until the 11th century. Lateron, Dudo suggests that Rollo’s (possible) Danish origins are related to the classical region of Dacia, thus making “duke Rollo” a classical hero. And Princess Gisla is married off to this “larger than life” hero, in exchange for peace and protection in Francia – the Kingdom of the Franks or Frankish Empire – in present-day Normandy, France. But who was this mysterious princess?

In order to examine that question, we need to help ‘Cherchez la femme’ as professor Barbara Olsen writes (2014). Her appeal to search out unknown women at the heart of a mystery, has as much relevance for the ongoing research of 10th century Francia as it has for her own period of expertise, the Greek Antiquity, where, in her words, ‘so often women have been shrouded in myth, notoriety or obscurity.’ With this blog post, I hope to make a modest contribution by collecting and reviewing sources that mention princess Gisla.

Historical Background
Roughly between the years 789 and 1100, the  looters and robbers later known as `Vikings` were the terror of Europe and its surroundings. Their attacks formed a recurring problem for many coastal cities, also in West Francia. This empire, also known by the Latin name of Francia Occidentalis, came into being in 843, with the Treaty of Verdun. Initially Charles II – nicknamed the Bald – became king of the western part, which included all areas west of a rough north-south line from Antwerp across Mâcon to Nîmes.

From 898 to 922, the area was governed by Charles III  (879-929) nicknamed the Simple (not because he was stupid, but because he was always just simple and clear in communication). When the Vikings besieged the Francian city of Chartres, in 911, they were defeated, but remained a threat. Charles the Simple then concluded the agreement of Saint-Clair-sur-Epte with the Viking leader Rollo. The location of Saint-Clair-sur-Epte was chosen because it was located in Neustria halfway between Paris and the coast. As part of the treaty, Rollo was loaned the area that would later form the Duchy of Normandy. In return, he would defend access to the Seine from attacks by other Vikings.

If you search for Gisela or Gisla on the Internet, you will discover a dearth of very short articles and very brief mentions in books about other (mostly: male) persons. Most of these more or less agree on the year in which the Francian princess Gisla was born, her parents and who she was married to. Basically, the general consensus among historians is that Gisela of France was born circa 900 at the court of the king of West Francia, Charles the Simple (Ferguson, 2009). Most likely, she was one of the six daughters of the King and his first wife, Frédérune (ibid). In line with Dudo’s description, it is also stipulated that Gisela was married off to Rollo, the founder and first ruler of the region of Normandy, after his conversion to Christianity in 911 (Davis, 2001; Patton, 2015). Luckily, Google Books and the British Library also allow to check these facts with medieval sources.

Benedictine monk and English chronicler Orderic(us) Vitalis (1075-1142) tells about Rollo’s baptism in his work The Ecclesiastical History of England and Normandy (115-1141): “casting away the idols which he [Rollo] before worshipped, with all his army devoutly embraced Christianity”. He also names Gisela, as “King Charles gave his daughter Gisela in marriage to Rollo”. It is likely that Gisela died childless. Ordericus Vitalis speaks of “William, his [Rollo’s] son, who succeeded him in the duchy of Normandy” and this William is sometimes named as a son of Gisla, but was probably the William later known as William Longsword (c. 893-942), a son of Rollo and his second wife, Poppa of Bayeux (born circa 880) or of Rollo and an unknown Irish lady, as Mark S. Hagger (2017) suggests.

While various historical records – like the Historia Normannorum and The Ecclesiastical History of England and Normandy – cite Gisela as one of the daughters of Charles’ the Simple and the genealogy of Count Arnulf of Flanders (950’s) names a Gisla as one of the daughters of King Charles, her character and existence as Rollo’s wife are moot. The absence of historical records written at the time of Gisela’s marriage to Rollo that confirm it, questions the legitimacy of the character as well as her existence. (Van Houts, 2000). Medieval historian Pierre Bauduin (2005) believes in Gisla’s existence, but adds that she could have been only three or four years old at the time of her marriage. But if Gisla were only a toddler, she could not have been the admirable and sexual woman from tales like the one below, that Robert Ferguson reads as a possible hint towards Rollo’s homosexuality.

Shortly after Rollo’s marriage to Charles’s daughter Gisla, two of Charles’s warriors paid her a visit. Gisla entertained them in private. Presently rumours began circulating, to the effect that Rollo had failed to consummate the marriage. Any suggestion of sexual impotence, casting doubt on the legitimacy of his heirs, would have seemed particularly dangerous to Rollo. Suspecting that Gisla’s visitors were the probable authors of the rumours, he had them arrested and summarily executed in the public market place in Rouen.

Perhaps this controversy surrounding the existence of Gisela/Gisla of France, can be explained by the fact that none of Charles’s children receive much, if any, recognition in historical records with the exception of Louis IV of France. The daughters of Charles the Simple are simply not credited for anything other than being mentioned as his daughters. Rollo is an iconic figure, a semi-legendary Viking-gone-Christian who protected Francia (after 911 there are no records of any more Viking raids there). He is celebrated as the great-great-great grandfather of William the Conqueror, the first Duke of Normandy and an example of the power of Christianity. But his first wife, Gisela, ended up being of little consequence as far as representation of history went and is left out of official family trees.

The fact that all articles and books I could find share the above scanty details about the French princess does little to reduce doubts surrounding the existence of the character. Nonetheless, the idea of a “princess Gis(e)la” became rather popular over 11 centuries after her death, due to her presence in two Netflix’ series: The Last Kingdom and Vikings. Various fans of these series have tried to unravel the mystery of Gisela, which added another layer to the confusion surrounding her, mostly by mixing her up with Gisela of Burgundy (c.  955-1007), who was the mother of Emperor Henry II (973-1024) and of Queen Gisela of Hungary (985-1065). She is also often confused with another princess Gisela of France (born c.819/821), who was the daughter of King Louis I “The Pious” (778-840), the son of Charlemagne, and Queen Judith of Bavaria (797-843). This Princess Gisela of France was married to Eberhard I of Friuli with whom she had children. One fan also names Gisela as the sister of Henry I (919/921-955), Duke of Bavaria, and another as Gisela, Abbess of Chelles (born in 757), who was the sister of Charlemagne.

Depictions in The Last Kingdom and Vikings

In The Last Kingdom, Gisela is one of the wives of main character Uhtred of Bebbanburg (based on the historical Uhtred the Bold, who lived a century later). In this Netflix’ series, Gisela and her brother, the later King Guthred of Northumbria, are the children of a Danish jarl who settled in Cumbraland (modern Cumbria). The character of Gisela was invented by author Bernard Cornwell for his Saxon Stories novels and included in Netflix’ series The Last Kingdom, in which she is played by German actress Peri Baumeister.

In Vikings, Gisla is portrayed by the French actress Morgane Polanski (the daughter of Roman Polanski) and married off to Rollo, who is presented as the brother of the famous Viking warrior Ragnar Lothbrok. (Although there is no evidence pointing towards family relations between Rollo and (a) Ragnar, it might have been true that Rollo participated in the siege of Paris.) Gisla and Rollo have a happy relationship and formed a family of five with their children: William, Marcellus and Celsa.

In this Netflix’ series, princess Gisla is presented as the daughter of a “King Charles” who is a combination of three historical West Frankish rulers that go by the name of Charles. The series often mention that Gisla’s father is a grandson of Charlemagne (Charles the Great), which would be Charles the Bald. But it was his grandson, Charles the Simple, who thought out the marriage of Rollo and Gisla. However, it was emperor Charles III aka “Charles The Fat”, who reigned during the 885 Siege of Paris and commanded Count Odo.

Just like her on-screen father, the character of Gisla is inspired by different historical figures. Firstmost, princess Gisla’s character is based on the tales surrounding princess Gisela of France, but also influenced by stories of Poppa/Popa of Bayeux and Jeanne d’Arc (c. 1412-1431). In Vikings, Morgane plays an inspiringly brave version of the legendary princess Gisla, who not only beautiful, but also clever and full of courage and resolution.

Ferguson, R. (2009). The Hammer and the Cross: A New History of the Vikings. Penguin Books Limited.

Olsen, Barbara A. (2014). Women in Mycenaean Greece: The Linear B Tablets from Pylos and Knossos. Routledge.

* a 2007 study suggests that 75% of children and 88% of adolescents have a circumscribed interest or passion (Klin A, Danovitch JH, Merz AB, Volkmar F. Circumscribed interests in higher functioning individuals with autism spectrum disorders: an exploratory study. Research and Practice for Persons with Severe Disabilities. 2007;32:89–100.)

4 Comments on “Princess Gis(e)la of France”